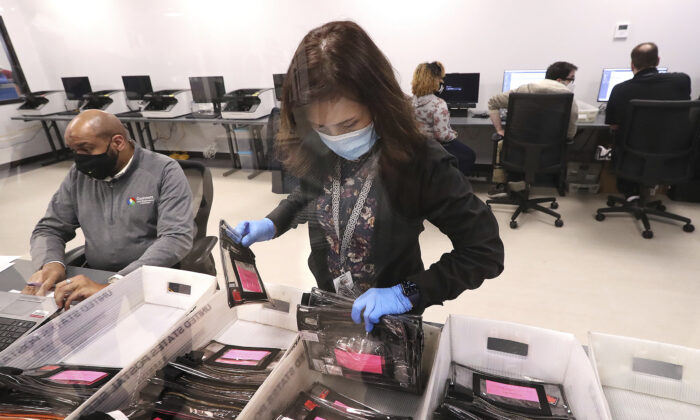 Three-quarters of local elections officials and staff workers who responded to a nationwide survey say the federal government isn’t doing enough to support their needs or protect them from a rising tide of threats since the 2020 elections.

That perceived lack of support and fears of “false political attacks on the election system” is why at least 20 percent of locally elected elections officials and professional staff plan to leave their posts before the 2024 election, according to a survey released this month by the left-leaning Brennan Center for Justice at New York University.

Of those who responded, 71 percent said the federal government must do more than create a U.S. Department of Justice (DOJ) task force to investigate threats against local election officials to protect them; 42 percent said they weren’t aware the task force even existed.

Half the respondents said their states must do more to boost election worker security, and about a quarter said local governments, counties specifically, must also step up protections for elections officials and staff.

About 20 percent of survey respondents said they’re “very unlikely” or “somewhat unlikely” to continue serving through 2024, citing political attacks on the system, stress, and retirement plans as primary reasons for leaving sooner than previously planned.

In Florida, the state’s 67 county elections supervisors are elected every four years. While most who are currently serving were elected in 2020, Wilcox said, one has resigned already and others have made it “crystal clear” they won’t seek reelection in 2024.

“As soon as we get past the midterms, I think we will see a flood of others” resigning or opting not to seek reelection, he said.

“I would not be shocked to see 25 percent” attrition, not only among elected supervisors, Wilcox said, but among administrative workers at county elections offices.

“When you think about it, this is the front-line staff that unfortunately takes a public beating” as nonpartisan bystanders in the crossfire of heated post-2020 election politics, he said.

While 30 percent of survey respondents who plan to leave their positions cited “stress associated with the job” as the primary motivator, another 29 percent said they were retiring as planned.

“Some of this attrition is retirement. Some have been there for a long time and it is just time for them to go,” Election Center Executive Director Tim Mattice said on March 17, agreeing with the Brennan Center’s 20 percent attrition forecast.

The “incredible experience in running an election—a presidential election, no less—during a pandemic” was demanding and exhausting for elections workers, but “additional pressures” have mounted since 2020, he said.

The 2020 election was “something they had never experienced before. That certainly would be a motivator for some folks to say, ‘Hey, maybe it’s time for me to step aside,’” Mattice said.

“It’s definitely been a different type of environment” since 2020.

The Elections Center is operated by the National Association of Elections Officers, based in Katy, Texas. The nonprofit, which represents more than 1,350 members in 44 states, has joined other groups in calling on federal and state governments to take threats against elected officials and administrative professionals seriously.

The National Association of State Election Directors, which represents state elections officials and staff in all 50 states from its Washington, D.C., headquarters, maintains that election officials “will persevere and will continue to administer fair elections in 2022,” amid an “unacceptable” wave of “threats, harassment and intimidation” directed at elections workers “for doing their jobs.”

The Election Official Legal Defense Network, operated by the Washington-based Center for Election Innovation and Research, is providing pro-bono legal help to election workers and calling for more state and federal prosecutors dedicated to addressing what it calls “domestic terrorism.”

They point to a 2022 measure adopted by Oregon legislators that makes it a crime to harass an election official, punishable by up to a year in jail and a possible $6,250 fine, as an example of legislation that other states should replicate.

Lawmakers in at least eight states have introduced bills during 2022 to better protect election workers and more harshly punish offenders, according to the National Conference of State Legislatures.

“We in Florida, we get people from Illinois or Missouri who have heard something, call attempting to berate us. We are having challenges there,” he said.

“I don’t know what you could do. We need to sit down and have some serious conversations about what are some good measures to put in place to ensure not only the physical and mental safety of our elections officials and personnel but also the safety of our democracy.”

The attacks get personal, Wilcox said.

“There needs to be a better way, or at least a more punitive way, to get people who are just maliciously fabricating stories and stuff,” he said.

“Right now, as an elected official, you can virtually say anything you want about me without any repercussions,” unless “there is an explicit threat of violence.”

Mattice said there will be high turnover between now and the 2024 elections, but there will be no shortage of elected officials and administrative workers to conduct local elections.

“We also know that for the number of people who are leaving, the local jurisdictions will fill these positions with new people coming in,” he said. “You hope there is a transition period where the folks with all the knowledge can share” their institutional insights with those taking their places.

Wilcox worries about the motivations of those who are running for some Florida county elections supervisor seats in upcoming elections, predicting the state soon may have “for lack of a better word, a new crop of supervisors” who are more partisan than their predecessors.

Mattice said there’s a distinction between employees in county election offices and those who serve, often in volunteer capacities, as poll-watchers during elections.

Most elections workers “try very hard to be nonpartisan” and are committed professionals “not looking at party, but at putting out a fair, equitable process that people can have trust in,” he said.

“Elections officials across the country work long hours and take a lot of abuse and don’t get paid a lot,” Mattice said. “We hope the people who are coming in are coming in for the right reasons. They are the gatekeepers of our democracy.”