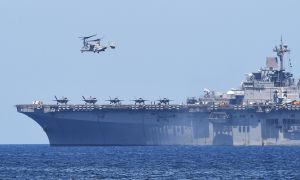 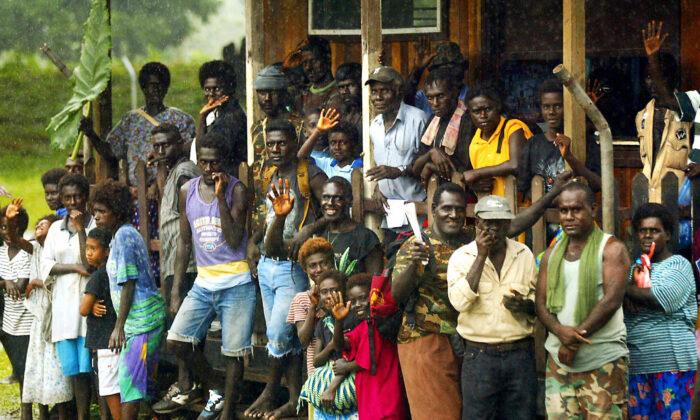 Locals wave farewell to departing troops after a ceremony in Arawa marking the withdrawal of peacekeepers from the troubled Papua New Guinean island of Bougainville, on June 30, 2003. The ceremony also signaled the establishment of a civilian peace monitoring team to replace the Australian-led Peace Monitoring Group operating on the war-ravaged island. (Nathan Richter/AFP via Getty Images)
Asia & Pacific

US Edges China Out of Race to Fund Bougainville Independence Vote

Western nations are looking to rein in China’s influence in the increasingly contested Pacific, where it has recently drawn away two of Taiwan’s allies, Kiribati and the Solomon Islands, triggering a strong rebuke from the United States.

The vote in PNG’s autonomous region of Bougainville, formerly the site of a bloody civil conflict, will run from Nov. 23 to Dec. 7, and could trigger separation negotiations to create a new nation in the strategic waters of the Pacific.

Two sources with direct knowledge of the arrangements in Bougainville told Reuters that China was not blocked from helping fund the referendum, but neither was it invited to contribute when the shortfall emerged.

“It’s just that the invitation never arrived, or, rather, was never sent,” one source said.

The second source said the West wanted to limit China’s engagement with what could soon be the world’s newest nation, strategically located in waters separating Asia and the Americas.

China’s Foreign Ministry declined to comment on whether it was involved in discussions to assist in the referendum.

“China has always adhered to the principle of non-interference in the internal affairs of other countries, and respects the independent choices of people in all countries,” it said in a statement.

The funding shortfall emerged early this year amid preparations, overseen by former Irish Prime Minister Bertie Ahern, to register the votes of 300,000 people, most of them spread over the main island of Bougainville, nearby Buka and other outlying islands.

The United States, along with Australia, New Zealand and Japan, helped plug the funding gap of 7.1 million kina ($2 million), according to a breakdown of funding arrangements provided to Reuters by the Bougainville Referendum Commission.

PNG is the biggest contributor to the referendum, setting aside 18.7 million kina ($5.4 million). The commission did not respond to questions why China, a major financier to PNG and the region, did not contribute.

Its referendum is part of a peace process negotiated at the end of a decade-long conflict in 1998 largely focused on how to allocate profit from the now shuttered Panguna gold and copper mine, then run by a forerunner of Rio Tinto.

There was also discord over the environmental impact of the mining operations.

The conflict between Bougainville’s rebel guerrilla army and PNG forces killed as many as 20,000, the worst violence in the region known as Oceania since World War Two.

Since the conflict, there has been little development in the resource-rich region, the former economic powerhouse of PNG.

While the referendum is expected to overwhelmingly back independence, says Australian think tank the Lowy Institute, there is uncertainty over how an independent Bougainville could fund itself, as it now relies on support from PNG.

The final step would be a vote in parliament after separation terms are agreed.

“The outcome of the referendum will have to be firstly ratified by the Papua New Guinea national parliament,” Wera Mori, the commerce and industry minister, told Reuters in an interview. “It would be subjected to a negotiated outcome.”