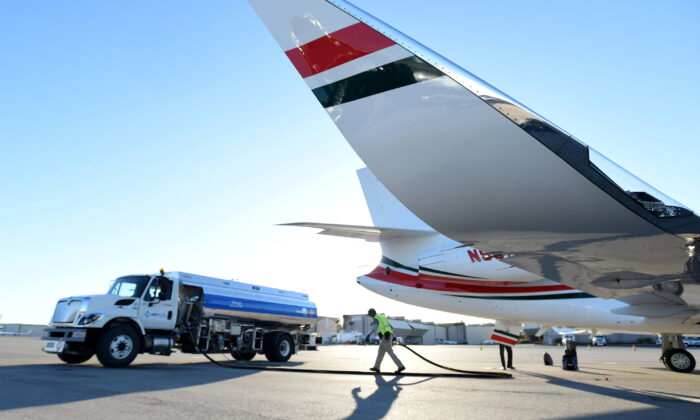 A business jet is refueled using Jet A fuel at the Henderson Executive Airport during the National Business Aviation Association (NBAA) exhibition in Las Vegas, on Oct. 21, 2019. (David Becker/Reuters)
Economy

Jet fuel prices are soaring on the U.S. East Coast, home to some of the world’s busiest airports, with buyers anticipating a growing shortage as supply dwindles amid sanctions on Russian energy exports.

Following Russia’s Feb. 24 invasion of Ukraine, the United States and allies slapped heavy sanctions on Russian industry, leading to a tightening in worldwide energy markets. Russia is the world’s largest exporter of crude and petroleum products, and the supply crunch is filtering through to global markets.

Costs in the United States for jet fuel have surged, particularly on the East Coast, which largely relies on shipments on the Texas-to-New Jersey Colonial Pipeline for refined products, as well as imports from Europe. However, Europe is dealing with its own supply issues, so distillate exports to the U.S. East Coast—also known as PADD 1—are down nearly 60 percent on a year-on-year basis, according to Refinitiv Eikon data.

“It is ridiculous what’s going on in PADD I with jet, and it’s not sustainable,” said Patrick DeHaan, lead petroleum analyst at GasBuddy.

Refiners spent most of 2020 blending excess jet fuel into their diesel pool or refining it further into gasoline as the coronavirus pandemic put a severe dent into air travel. Demand for jet fuel is now about 5 percent below 2019 levels, according to data from the U.S. Energy Information Administration.

But U.S. distillate inventories are currently about 20 percent below the pre-pandemic five-year average for the 2015–2019 period, compared with deficits of 11 percent in crude and 1 percent in gasoline.

Western European refiners are unable to make up the gap in supply due to their own constraints—Russia is a major exporter of middle distillates like jet fuel to Europe.

Some of the U.S. East Coast deficit results from issues in California, where in recent weeks a Chevron refinery and a PBF plant experienced malfunctions with fuel-producing units, according to people familiar with the matter.

U.S. trading partners in Asia and the Middle East are incentivized to send barrels to the West Coast instead of the East Coast, according to Zachary Rogers, director of refining and biofuels at Rapidan Energy Group.

The spread between heating oil and U.S. crude futures is $43.55, compared with $15.50 a year ago, according to Reuters data. Jet fuel is heavily aligned with heating oil as they are both middle distillates.

“Margins are higher than I’ve ever seen them, so high prices are great for any refinery that’s not malfunctioning,” said one West Coast refinery worker.

Relief could arrive in the coming weeks as West Coast refining capacity rebounds and the Biden administration approves waivers to the Jones Act—which requires shipments from one U.S. port to another to be via U.S.-flagged vessels—for barrels to move to the West Coast, Rogers said.

“That could be a real game changer to bring down prices, making this a more temporary event,” Rogers said.