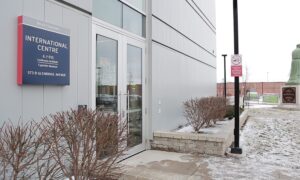 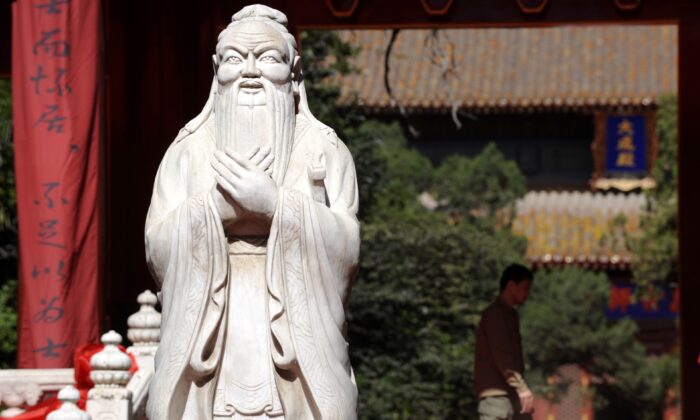 A man walks beside a statue of Confucius at the Confucius Temple in Beijing on Sept. 28, 2010. (LIU JIN/AFP via Getty Images)
US-China Relations

The Trump administration on Aug. 13 designated the center that supports Beijing-backed Confucius Institutes in the United States as a foreign mission of the Chinese regime.

The Washington-based nonprofit Confucius Institute U.S. Center (CIUS) promotes Beijing-funded Confucius Institutes and Confucius Classrooms in universities and schools across the United States. Confucius Institutes, which bill themselves as language and culture programs, have drawn intensified scrutiny in recent months over their role in spreading propaganda and suppressing free speech at U.S. educational institutions.

U.S. Secretary of State Mike Pompeo said the designation recognizes “CIUS for what it is: an entity advancing Beijing’s global propaganda and malign influence campaign on U.S. campuses and K–12 classrooms.” The designation restricts the CIUS’s operations and staffing levels in the country.

“Confucius Institutes are funded by the PRC [People’s Republic of China] and part of the Chinese Communist Party’s global influence and propaganda apparatus,” Pompeo said in a statement.

A growing number of Confucius Institutes have shut down in recent years amid criticism of their role in the regime’s campaign to expand its global influence.

There are currently 75 Confucius Institutes set up in American universities and hundreds of Confucius Classrooms across grade K–12 classrooms in the country, according to the education advocacy group National Association of Scholars (NAS). They’re funded and operated by Hanban, or the Office of Chinese Language Council International, an office within China’s Ministry of Education.

Since 2006, Hanban has poured more than $158 million toward roughly 100 U.S. universities for Confucius Institutes, according to a 2019 U.S. Senate subcommittee on investigations report (pdf). Between 2008 and 2016, Hanban spent more than $2 billion on setting up such institutes on college campuses around the world.

Hanban designates CIUS as its “overseas representative” in the United States, the Senate report said, while CIUS told the Senate subcommittee that it wasn’t the headquarters for Confucius Institutes, and merely provided support for the programs.

NAS researchers have said that Confucius Institutes present positive images of the Chinese regime while whitewashing and avoiding discussion of topics deemed sensitive by the Chinese Communist Party (CCP), such as its human rights abuses.

Pompeo said the move was an attempt to seek reciprocity in relations with Beijing. Earlier this year, the state department also designated nine Chinese state-media outlets as foreign missions, in recognition of their role as the CCP’s propaganda organs. Meanwhile, the Trump administration has quickened its actions targeting a range of threats by Beijing, including rights abuses in the regions of Xinjiang and Hong Kong, rampant theft of American technology, and military aggression in the South China Sea.

“Beijing has enjoyed free and open access to U.S. society, while denying that same access to Americans and other foreigners in China,” Pompeo said.

He added that the Chinese regime has “taken advantage of America’s openness to undertake large-scale and well-funded propaganda efforts and influence operations in this country.”

The secretary said the goal of the latest designation was “to ensure that American educators and school administrators can make informed choices about whether these CCP-backed programs should be allowed to continue, and if so, in what fashion.”

“The United States wants to ensure that students on U.S. campuses have access to Chinese language and cultural offerings free from the manipulation of the Chinese Communist Party and its proxies,” he said.

Rachelle Peterson, a senior research fellow at NAS, said the department’s action rightly recognizes Confucius Institutes as “central nodes of the CCP’s overseas propaganda network,” and shines a light on the regime’s “pernicious efforts to influence higher education.” NAS has called for the closure of all Confucius Institutes in the country.

“This designation is one more excellent reason to shut Confucius Institutes down,” Peterson told The Epoch Times in an email.