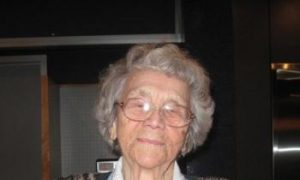 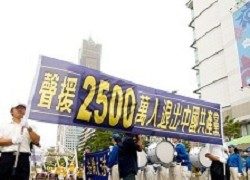 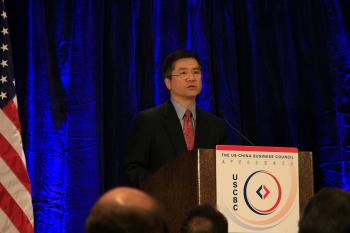 US Commerce Secretary Says China Must Turn Promises Into Reality

Speaking at a luncheon organized by the U.S.-China Business Council Thursday, Jan. 13, Locke outlined five steps that need to happen before China’s numerous promises for economic and business reforms will be considered reality.

The steps begin with a statement of principle and end with a genuine change in China’s business practices. Promises rarely make it to the end.

“When it comes to indigenous innovation, intellectual property or a variety of other market-access issues, an enduring frustration is that in too many cases only the earliest steps are taken, but not all five,” said Locke to a small gathering of U.S. business leaders. The US-China Business Council represents 220 U.S. companies doing business with China.

“Perhaps an agreement is made but it never becomes binding. Or perhaps there’s a well-written law or regulation at the national level, but there’s lax enforcement at the provincial or city level,” said Locke.

Indigenous innovation refers to a Chinese government policy, that, in effect, shuts out foreign companies from winning government contracts and blocks them from the right to supply goods to China’s massive state-owned enterprises.

“These policies mandate that products must be made, conceived, and designed in China,” said Locke.

According to a Council survey, American companies are showing signs of caution about doing business in China for the first time this year, due to concerns over Chinese protectionism.

Businesses around the world have been complaining and expressing “significant concerns,” said Locke, about issues of lax intellectual property protection and enforcement, lack of transparency in government decision making, and policies about indigenous innovation.

During recent high-level trade talks in Washington, China’s Vice Premier Wang Qishan made a number of promises in areas critical to American businesses.

China agreed to remove barriers that discriminate against American companies selling parts and components, such as telecom devices and machinery, to manufacturers in China.

They also agreed to reduce the amount of counterfeit software in government offices and state-owned enterprises and to start a public campaign aimed at reducing intellectual property-rights violations in China, the latter to be led personally by the vice premier.

Locke said that while the U.S. government welcomed the agreements, “to be clear, they are only a first step. … They must be turned into concrete actions with results.”

“We have heard Chinese leaders condemn IP-theft in the strongest terms, and we’ve seen central government laws and regulations written or amended to reflect that sentiment … but American and other foreign companies … still lose billions of dollars from counterfeiting and IP-theft in China every year,” said Locke.

The Commerce secretary called for vigilance by the United States and “all countries and businesses around the world that benefit from rules-based trading” to keep watch on China to ensure that it carries out its promised market reforms.

He said he knows that companies and countries can gain short-term advantages from lax rules in the commercial space, but if innovators fear their inventions will be stolen, they may decide to sell elsewhere.

We cannot tell exactly what the future will look like, said Locke.

The U.S. wants a “level playing field for its companies, where the cost and quality of their products determines whether or not they win business,” he said.