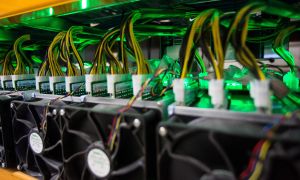 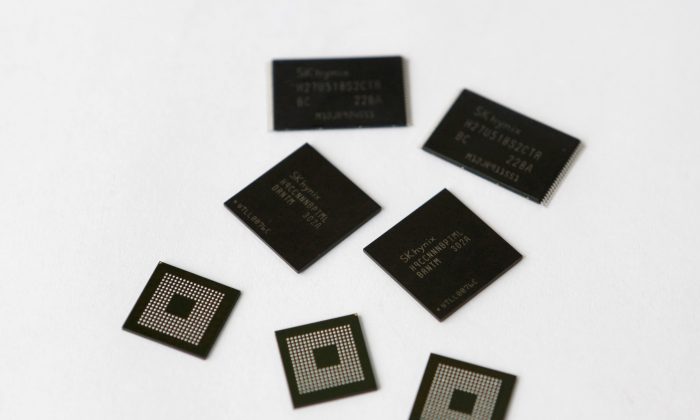 Mobile memory chips made by chipmaker SK Hynix are seen in this picture illustration taken in Seoul May 10, 2013. (Reuters/Lee Jae-Won/File Photo)
Markets

US Chipmakers May Give Clues on China Hazard

SAN FRANCISCO—Intel Corp. operates mostly outside the Apple-sphere, and that is exactly why whatever it says this week about business in its vital Chinese market matters so much for investors.

Apple rattled global markets this month when the iPhone maker cut its revenue outlook for the first time in 15 years, blaming factors like the U.S.-China trade dispute and a slowdown in the Chinese economy.

Upcoming quarterly scorecards from Intel, Texas Instruments, and other chipmakers, as well as Ford Motor Co., will shed light on whether Apple made a convenient excuse for its own troubles or revealed a strengthening headwind faced by global companies that rely on China for a big chunk of their sales.

“They should give us a good gauge of what is happening in China beyond smartphones because Texas Instruments is mostly industrials and autos, and Intel is PCs and servers, and they’re not being driven by the Apple smartphone situation,” said Daniel Morgan, a portfolio manager at Synovus Trust Company in Atlanta.

Underscoring Wall Street’s sensitivity to China trade, the S&P 500 jumped 1.3 percent on Jan. 18 after a report that China has offered to go on a six-year buying spree to ramp up U.S. imports in order to reconfigure the relationship between the two countries.

U.S. stock markets will be closed on Jan. 21 for the Martin Luther King Jr. holiday.

China accounts for almost a quarter of Intel’s revenue, while modem chips for iPhones, the focus of recent concerns about Apple, account for just a tiny part of Intel’s business.

While most Intel processors sold in China are used to build laptops and servers for export, Chinese consumers and companies also purchase many of those devices.

With the tariff war already taking a toll on China’s trade sector and increasing the risk of a sharper slowdown in the world’s second largest economy, U.S. multinationals will face pressure to be cautious about their outlooks for 2019.

“Anyone doing business in China, especially if you are an American company—I don’t think you can come out with super-positive guidance,” said Stephen Massocca, senior vice president at Wedbush Securities in San Francisco.

Texas Instruments and programmable chipmaker Xilinx, both reporting on Jan. 16, and Intel, reporting on Jan. 17, are among the S&P 500 companies most reliant on China for their revenue. Investors will listen closely to what those companies may say about how the China trade dispute and the country’s cooling economic expansion are affecting demand for their products.

Also on Jan. 16, Ford’s quarterly report will give investors a glimpse of the automaker’s progress trying to reverse a sales slump in China, the world’s biggest car market.

Fears about the impact of the trade conflict on U.S. technology companies crystallized this month after Apple cut its sales forecast, blaming China’s economy.

In October, analysts on average forecast S&P 500 technology companies would increase their earnings per share by 8.5 percent in 2019, according to Refinitiv. But expectations for 2019 tech EPS growth have since withered to just 2.2 percent.

Still, many Silicon Valley companies remain in favor among investors. Technology was the third most recommended sector among 13 big research firms recently surveyed by Reuters, behind healthcare and financials.

With the S&P 500 recently trading at 15 times expected earnings, down from 18 times a year ago, a key argument for Wall Street bulls is that the stock market has become undervalued after December’s selloff. But if Apple’s warning about slow China demand is repeated by Intel, Texas Instruments, and others, the S&P 500 may appear less of a bargain at current levels.

The Philadelphia Semiconductor Index is down about 15 percent from its high in March 2018, as chipmakers struggle with a cooling smartphone industry and slower demand for memory chips used in cars, industrial equipment and other markets.

While Wall Street gained this month due to optimism that the trade dispute will be resolved, China for years has struggled to maintain its pace of economic growth. Even a quick end to the trade dispute would not guarantee a return to strong results from U.S. companies’ China operations.

“Trade may be pointed to as a reason for issues with input costs or weakness in sales, but I think that just as important is the fact that the economy in China is slowing, and they are incremental buyers for both semiconductors and cars,” said Patrick Palfrey, an earnings analyst at Credit Suisse.

Analysts, on average, expect Intel to report fourth-quarter revenue up 11 percent to $19 billion, and to forecast 2019 revenue will rise 3 percent to $73.2 billion, according to Refinitiv.

Analysts expect Texas Instruments to grow net income by 10 percent in the December quarter then shrink in 2019, according to Refinitiv.