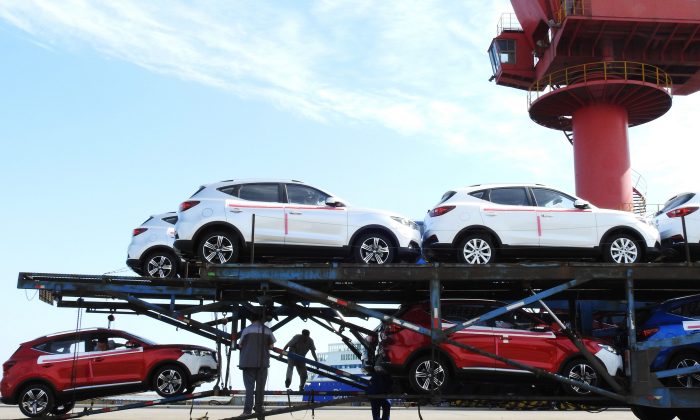 Workers load cars to be exported at a port in Lianyungang in China's eastern Jiangsu Province on May 31, 2018. (/AFP/Getty Images)
US-China Relations

LOS ANGELES—President Donald Trump’s trade war with China has U.S. companies shifting purchases of tariff-targeted products like furniture, refrigerators and car tires to countries such as Vietnam, South Korea, Taiwan and Mexico, according to a new analysis released on April 10.

The United States and China have been embroiled in a tit-for-tat tariff battle since mid-2018. The Trump administration imposed tariffs of 10 to 25 percent on about $250 billion of Chinese goods.

U.S. imports of Chinese-made furniture by retailers such as IKEA, Home Depot, Target Corp and Room to Go fell 13.5 percent in the first quarter. That was partly offset by a 37.2 percent rise in shipments from Vietnam and a 19.3 percent increase in imports from Taiwan, Panjiva said.

Imports of Chinese refrigerators fell 24.1 percent during the quarter, when shipments from South Korea and Mexico jumped 31.8 percent and 32 percent, respectively.

“A major factor in that shift has been a rearrangement in supply chains by Samsung Electronics and LG Electronics,” Panjiva said in the report.

The auto industry has also been rethinking trade routes.

Tire imports from China slumped 28.6 percent during the first three months of the year. At the same time, U.S. sea ports saw a 141.7 surge in product from Vietnam and an 11.1 percent increase in tire shipments from South Korea. Hankook Tire and Nexen are among the suppliers picking up the new business, Panjiva said.

U.S. companies are also shifting factory investments in the wake of the China trade tiff, which a trio of economists estimate has already cost U.S. consumers and companies $19.2 billion.

“We are excited about this addition to our manufacturing footprint, which diversifies our sourcing to protect against risk, including tariffs,” Cooper Chief Financial Officer Christopher Eperjesy said in February, when the company announced a $34 million write-down on the value of a joint venture manufacturing project in China.