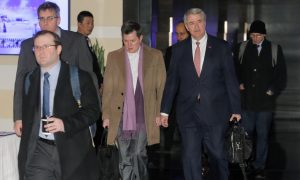 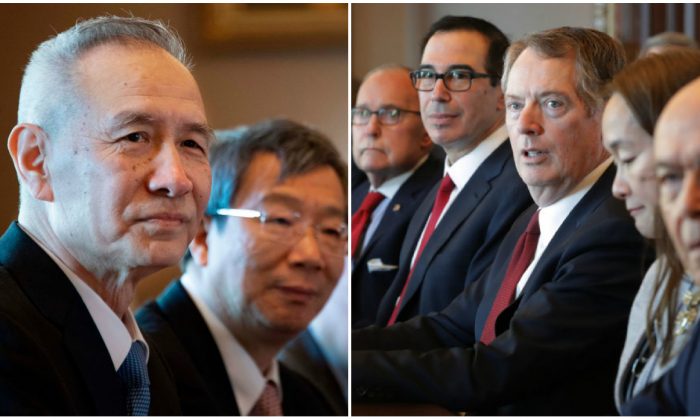 (L) The Chinese Delegation, including Vice Premier Liu He (L) and Governor of the People's Bank of China Yi Gang (2nd L) looks on during US-China Trade Talks in Washington, DC, on Jan. 30, 2019. (Jim Watson/AFP/Getty Images) (R) Trump Administration officials sit down with Chinese vice ministers and senior officials for negotiations in the Diplomatic Room at the Eisenhower Executive Office Building January 30, 2019 in Washington, DC. (Chip Somodevilla/Getty Images)
US News

WASHINGTON—High-stakes trade talks between the United States and China started Jan. 30 in Washington in a bid to resolve differences and reach an agreement before the March deadline.

The U.S. and Chinese officials met at the Eisenhower Executive Office Building located next to the White House, opening two days of high-level talks. U.S. Trade Representative Robert Lighthizer leads the American delegation, while the Chinese team is headed by Vice Premier Liu He. President Donald Trump will also meet with Liu on Jan 31.

As part of the truce deal between Trump and Chinese leader Xi Jinping in early December last year, China agreed to deliver structural changes that Washington has been demanding for years. Both sides agreed to start talks on reforms with respect to forced technology transfer, intellectual property protection, non-tariff barriers, cyber intrusions and cyber theft, and opening the Chinese market to U.S. services and agriculture.

In an effort to ease negotiations in Washington, Beijing announced that it would pass a new foreign-investment law to end forced technology transfers and other restrictions imposed by the state. The announcement came hours before the start of the two days of talks. State-run Xinhua news agency reported that the National People’s Congress would vote on the new investment law when it holds its first annual session on March 5.

According to critics, however, some of the details of the draft law are vague and hence, Beijing’s move won’t play a significant role in the negotiations.

The Chinese Communist Party’s (CCP) expedited its review of the foreign investment law, which was intended to serve as a bargaining chip for trade negotiations, according to Xie Tian, a professor at the University of South Carolina.

“The most crucial issue is that no matter what the CCP does, the international community does not believe it,” he told NTD, a media partner of The Epoch Times.

China uses various tactics to gain economic advantage, such as forcing foreign investors to form joint ventures with local partners and hand over their most sensitive technologies. The regime also pressures foreign firms to relocate their production, and research and development facilities in exchange for market access.

To stop an escalating trade war, both sides declared a 90-day halt on tariffs on Dec. 1, 2018, at the end of a bilateral meeting on the sidelines of the G-20 summit in Argentina.

As part of the deal, Trump agreed to postpone the planned increase in tariffs on $200 billion worth of Chinese goods. If both sides fail to reach an agreement by March 1, U.S. tariffs on Chinese goods will be raised to 25 percent from 10 percent.

It will be difficult for both sides to a strike a timely deal that addresses the most difficult structural issues, according to Marie Kasperek, deputy director of global business and economics program at Atlantic Council. However, she expects a partial agreement will be sufficient to avoid an escalation of the crisis for the short term.

By March 1, China may commit to opening its market significantly to U.S. products, especially in the agricultural sector and delivering foreign investment reform that ends forced technology transfer, she said.

“If there is a deal, it will be mostly focusing on economic wins for the United States and an agreement to commit to further dialogue,” she added.

According to Scott Kennedy, a China expert at the Center for Strategic and International Studies in Washington, catching up on the reform and opening agenda for Beijing may take time. However, China can make some meaningful progress immediately to break the ice, he wrote in a report.

“These immediate changes would build goodwill and serve as a starting point for structural reforms to be implemented over years to come on a feasible schedule,” he said.