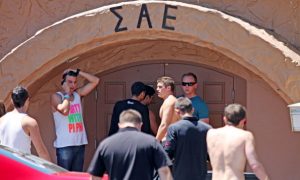 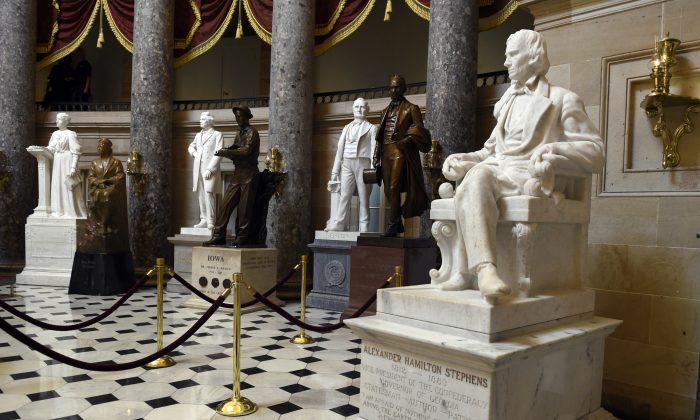 A statue of Alexander Hamilton Stephens is on display in Statuary Hall on Capitol Hill in Washington, D.C., on June 24, 2015. (AP Photo/Susan Walsh)
US

WASHINGTON—Alexander H. Stephens, onetime vice president of the Confederacy, sits memorialized in stone, right leg crossed over left, staring sternly into the distance as summer-clad tourists mill about him in the U.S. Capitol’s Statuary Hall. Solemn and cold, he looks like he could sit there for eternity.

But the renewed debate about symbols of the Confederacy in the wake of the horrific shooting at a black church in Charleston, South Carolina, raises new questions about whether he will.

The move in South Carolina to remove the Confederate flag from the statehouse grounds is prompting members of Congress to take a new look at Confederate images that surround them every day, including statues of Stephens, Confederate Gen. Robert E. Lee, Confederate President Jefferson Davis and a number of other Confederate leaders or fighters.

“Young children, school children, walk by these statues, and those of us who serve in the Congress, we have to get our own house in order,” Lewis said. “We have to have a cleansing in this place.”

Some of Lewis’ Republican colleagues disagree.

Is the Confederate Flag Unconstitutional?

“He did a lot of other great things in Georgia other than being vice president of the Confederacy, and that’s just one of the things he did in life and you can’t change that,” Rep. Lynn Westmoreland, R-Ga., said of Stephens. “To me it doesn’t equate. The flag is a very divisive symbol that people take very much offense to.”

In a similar debate, Rep. Bennie Thompson, D-Miss., introduced a resolution Wednesday calling for the removal of any state flag depicting the Confederate battle flag from the House portion of the U.S. Capitol and from House office buildings.

Thompson said his measure would only affect Mississippi, the sole state whose flag still contains the rebel insignia. Members could still display the flag in their offices.

Some 10 figures in the National Statuary Hall Collection are of Confederate leaders, or people who fought for the Confederacy during the Civil War.

Apart from Stephens, Lee and Davis, they include Edmund Kirby Smith of Florida, a general who “surrendered the last military force of the Confederacy,” according to the Architect of the Capitol’s description; James Zachariah George of Mississippi, a Confederate colonel who was imprisoned and taught law to fellow prisoners; and Joseph Wheeler of Alabama, a noted cavalry general.

Each state donates two statues to the Statuary Hall Collection and they are selected by individual states, not by the federal government or Capitol officials. Decisions on whether to keep or remove them are up to state officials.

In the case of the statue of Stephens, Sen. Johnny Isakson, R-Ga., said it was already under discussion by the state, and he declined to declare his own views. “I’m going to share my input with the governor and the committee as he puts that together and we’re going to do the right thing in Georgia,” Isakson said.

Apart from the Statuary Hall Collection, numerous other statues, portraits and busts dot every corridor and office of the Capitol. Among them is a bust of John Cabell Breckinridge, who served as vice president under President James Buchanan and went on to join the Confederate army and become secretary of war to the Confederacy. There is no comprehensive list that shows whether any other Confederate figures number among the Capitol images.

The Pentagon has also found itself reckoning with the legacy of the Confederacy. The Army’s top spokesman issued a brief statement Wednesday defending the past practice of having forts and posts named after Confederate generals, saying they represent individuals, not causes.

Calls to remove Confederate statues seem to be coming mainly from Democrats.

Rep. Kathy Castor, D-Fla., issued a statement calling for Smith’s statue to be removed. “A wave is sweeping the country to revisit symbols and representations that better reflect the accuracy of our nation’s history and a more inclusive legacy,” she said.

Others thought differently. Sen. Tim Scott, a black Republican from South Carolina, embraced his state’s call to remove the Confederate flag from the statehouse grounds but said he didn’t think the move should extend to statues at the U.S. Capitol.