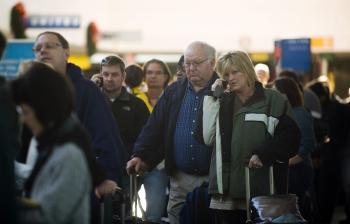 Heightened security caused long waits and missed flights at airports in Canada and the United States after a Nigerian man attempted a terrorist attack on a Northwest Airlines flight on Christmas Day in Detroit. (Jim Watson/AFP/Getty Images)
US

To comply with security measures imposed by Canadian and U.S. government authorities on flights from Canada to the U.S., Westjet, Air Canada, and Jazz continue to permit only a single carry-on item.
“Passengers and their carry-on allowance will be strictly limited and subject to full searches at airport screening points,” Air Canada said in a statement.

And while the overall situation at Canadian airports has improved, Air Canada said delays are still a possibility on U.S.-bound flights. Northbound flights from the U.S. to Canada as well as domestic and international flights are also faced with late inbound aircraft and airport congestion.

The new carry-on restrictions, in effect at least until Dec. 30, follow an incident on board a Detroit-bound Northwest Airlines flight on Christmas Day in which a man with links to al-Qaeda allegedly tried to blow up the aircraft. The man was overpowered by passengers and crew and the plane landed safely.

Umar Farouk Abdulmutallab, 23, a Nigerian student, has been charged with attempting to detonate an explosive device on the aircraft, which was carrying 278 passengers.

The incident caused widespread delays, missed flights, and long lineups over the Christmas weekend as passengers had to pass through a second security checkpoint. Dozens of cancellations on domestic and international flights were reported at airports across the country.

At Pearson International Airport in Toronto, one in 10 U.S.-bound flights was cancelled on Sunday.
A wing of al-Qaeda based in Yemen and Saudi Arabia said in a Web statement that it was behind the failed bomb attempt, which was intended as a response to U.S.-backed attacks on the group in Yemen.

According to news reports, the packet of explosive material Abdulmutallab was carrying in his underwear was powerful enough to blow a hole in the side of an aircraft. Officials said the detonator Abdulmutallab intended to use—a syringe filled with acid—failed to work.

Transport Minister John Baird said in a statement that he has instructed officials with Transport Canada and the Canadian Air Transport Security Authority to “assume a heightened state of vigilance” in light of the attempted bomb attack.

“It is clear that Canada is not immune from incidents of terrorism,” he said.

Both Westjet and Air Canada advise Canadians traveling abroad to be at the airport two to three hours before scheduled flight times.

In an effort to speed things up, both airlines are waiving excess baggage charges for checked baggage on a temporary basis for U.S.-bound passengers travelling from Canada. At no additional charge, passengers will be allowed to check up to three items of baggage until further notice.