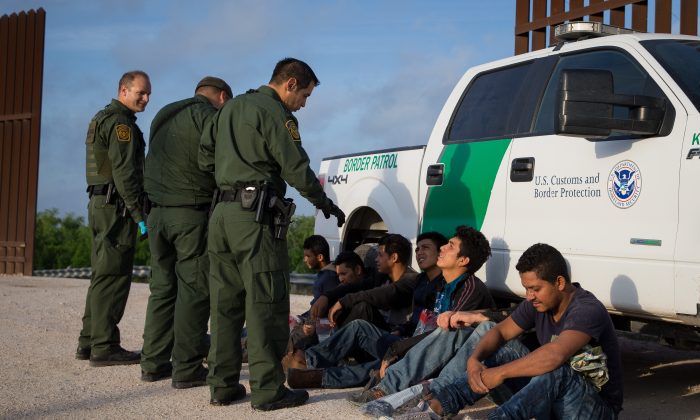 Border Patrol agents apprehend illegal immigrants shortly after they crossed the border from Mexico into the United States in the Rio Grande Valley Sector near McAllen, Texas, on March 26, 2018. (LOREN ELLIOTT/AFP/Getty Images)
US News

NEW YORK—U.S. border officers apprehended more than 132,000 people crossing the U.S. southern border in May, the government said on June 5, an increase over the previous month and the most in more than a decade, reaching what officials said were “crisis” levels.

President Donald Trump has grown increasingly frustrated with the rising number of mostly Central American migrants attempting to cross the U.S.-Mexico border, and the new arrest numbers come as he has threatened Mexico with across-the-board tariffs if it does not do more to stem the flow.

“Our nation is experiencing an unprecedented border security and humanitarian crisis on the southwest border, both at and between our ports of entry,” Randy Howe, the executive director for operations, Office of Field Operations at U.S. Customs and Border Protection (CBP), told reporters on a call. He said on June 4 alone, CBP apprehended more than 4,100 individuals and had 19,293 people in custody. “We are bursting at the seams. It is unsustainable,” Howe said.

Border agents apprehended 132,887 people at the southwest border in May, according to CBP data, a nearly 34 percent increase from April. If trends continue over the next few months, apprehensions for the 2019 fiscal year, ending Sept. 30, will be the highest in 13 years, said Brian Hastings, chief of the U.S. Border Patrol.

More than 63 percents of those apprehended were children and people traveling as families.

Border officials deemed a further 11,391 people “inadmissible,” up 12 percent from the previous month. That category includes people who present themselves for legal admission at a port of entry but are turned away, and people who seek asylum at ports of entry.

The migrant arrivals, which have been building over the past several months, are mostly individuals who surrender to border officials and request asylum in the United States because they fear violence and persecution in their home countries.

Most families are released to pursue their asylum claims in U.S. immigration courts, because of limits on how long children can be held in detention. The pursuit of such claims can take years because of ballooning court backlogs and most fail to appear in court.

U.S. officials say they do not have the proper facilities to process the number of arriving children and families. A U.S. government watchdog recently reported on “dangerous” overcrowding at one border patrol facility in El Paso, Texas.