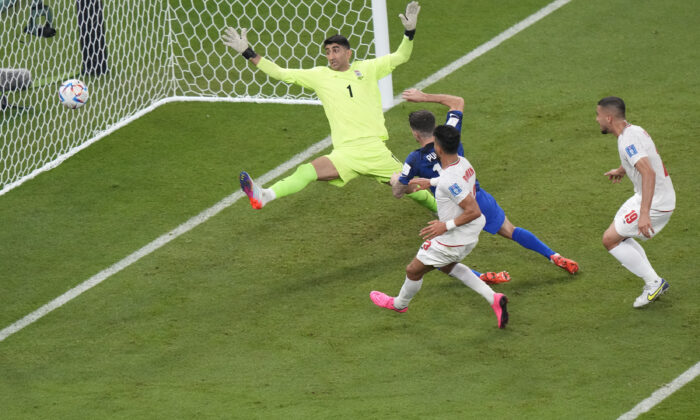 Christian Pulisic of the United States scores his side's opening goal during the World Cup group B soccer match between Iran and the United States at the Al Thumama Stadium in Doha, Qatar, on Nov. 29, 2022. (Luca Bruno/AP Photo)
By Nhat Hoang

Christian Pulisic, who has become known by fans as “Captain America,” sacrificed himself to score the United States’s (USMNT) sole goal in a must win match against Iran in World Cup Group B match at the Al-Thumama Stadium in Doha on Tuesday, Nov. 29.

The 1–0 victory came from the youngest starting lineup ever for the U.S., in front of a 42,127 crowd. Yunus Musah, 20, on Tuesday became the only American to celebrate his birthday in a World Cup match, and at 19 was the youngest American to start a World Cup game last week.

“Proud in the first half that we showed what we could do soccer-wise,” said U.S. coach Gregg Berhalter. “[The team] gave every single ounce of energy, and we’re undefeated going into the next round.”

American goalkeeper Matt Turner stated that it was “an emotional game on many different fronts,” with the second-youngest team playing a more experienced Iran team. “We stuck together and it’s just a great feeling to represent this country and to have such a close-knit group.”

Turner began playing soccer in 2010, inspired by the U.S. advancing to the 16th round that year on Landon Donovan’s late goal.

Iran is eliminated, needing a draw to advance having defeated Wales—while the U.S. tied with the Welsh and English.

Iran’s coach, Carlos Queiroz, who coached the New Jersey MetroStars in 1996, played conservative, bunkering deep in defense resulting in no shots in the first half.

The Americans dominated statistically with 12 shots (five on goal), while Iran had just four shots (one on goal).

Pulisic’s goal came in the 38th minute from a Sergino Dest assist-header, after a long pass into the middle of the box to Pulisic for a volley a few yards in front of the goal.

“Captain America” suffered an abdominal injury from the hard collision with Iranian goalkeeper Alireza Beiranvand in front of the goal following the shot. Pulisic struggled to continue playing before being replaced by Brendan Aaronson at halftime.

Pulisic was taken to the hospital eventually diagnosed with a pelvic contusion—having successfully contributed to the USMNT’s return to the world stage after failing to qualify in the previous World Cup.

The 45+6th minute found Timothey Weah seemingly scoring on a breaking run, but it would be called back after VAR video review.

The Americans continued their attack in the second half, forcing the Iranian goalkeeper into his third save, before Iran got their first shot on a header sailing high in the 51st minute.

Musah missed a direct free kick from 23 yards in front of the goal in the 69th minute.

Josh Sargent was substituted in the 77th minute following an injury from a tackle, resulting in Sargent stepping on the ball and possibly hyperextending his leg.

Iran attempted a dangerous cross in the 82nd minute with a volley that popped up to Turner for an easy save. Walker Zimmerman then replaced Timothy Weah.

The U.S. survived a goal scare in the 93rd minute when Morteza Pouraliganji missed a header from a free kick on the left.

A final scare came in the 90+8th minute when Turner came out of the goal for a save, and the play was stopped for a VAR review for a potential foul by the U.S., which confirmed there was no foul.

The Americans finished second in Group B behind England and will next face the Netherlands, who defeated host Qatar 2–0, in the knock-out stage Round of 16 on Saturday at 7 a.m. Pacific Time.