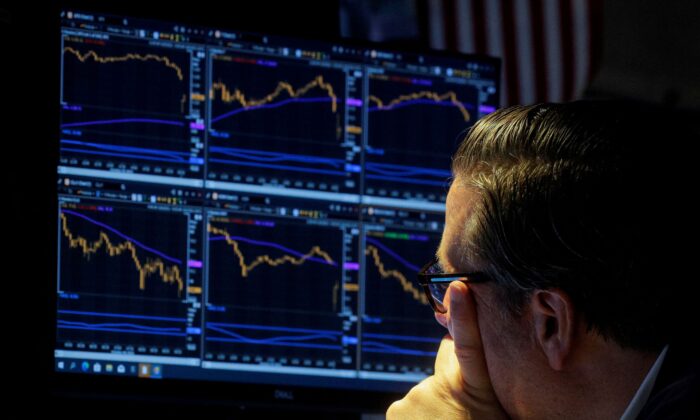 A specialist trader works inside a booth on the floor of the New York Stock Exchange (NYSE) in New York City on Oct. 6, 2021. (Brendan McDermid/Reuters)
Markets

Biden, in a statement emailed to reporters, paid tribute to the “decisive action” which the Fed had taken in response to the COVID-19 pandemic.

And senior bankers echoed the presidential praise for Powell’s swift and steady hand during the coronavirus crisis.

“Chairman Powell has been a steadying force throughout the pandemic and I’m glad to see him continue in this role,” Christiana Riley, chief executive of Deutsche Bank Americas U.S. business, said.

“Consistency at the top of the Federal Reserve is reassuring during this critical point in the post-pandemic recovery.”

The White House said Lael Brainard, the Federal Reserve board member who was the other top candidate for the job, will be vice chair.

The S&P 500 bank index was up 2.8 percent, on pace for its biggest daily percentage gain in 5 weeks.

One area of lingering concern for banks might be Biden’s failure to announce a new regulatory chief to replace current head of supervision Randal Quarles, who stepped down from his role overseeing the country’s biggest banks in October.

Biden said the supervision post and other Fed picks would be announced in early December.

Some analysts raised concern that Biden may appoint a candidate with an aggressive regulatory agenda to satisfy progressive Democrats unhappy at Powell’s reappointment.

Jaret Seiberg, an analyst at Cowen Washington Research Group, said the best outcome banks can hope for would be a candidate with a similar agenda to Brainard while a politically-motivated appointment could be more negative for banks.

Kevin Fromer, CEO of the Financial Services Forum, which represents the largest eight U.S. banks and their CEOs, congratulated both Powell and Brainard.

“We expect regulators will continue to hold the largest banks to the high regulatory and supervisory standards that have remained in place to support a resilient and essential part of the U.S. financial system.”