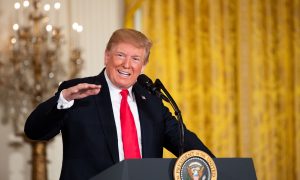 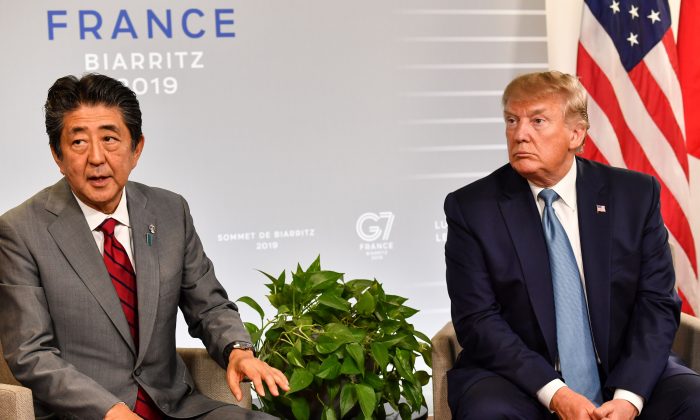 Japan's Prime Minister Shinzo Abe (L) sits with U.S. President Donald Trump during a bilateral meeting on the sidelines of the G-7 summit in Biarritz, southwestern France on August 25, 2019. (NICHOLAS KAMM/AFP/Getty Images)
US

Japanese negotiators agreed to give the Trump administration the same tariff reductions on meat imports envisioned under the proposed 12 nation Trans-Pacific Partnership (TPP) agreement. President Trump withdrew from the deal in January, complaining that the 5,600-page multilateral deal negotiated by his predecessor would encourage more offshoring of American jobs and undercutting of U.S. workers’ wages.

Japan is the fourth-largest market for U.S. agriculture, with $12.9 billion of U.S. imports, but it has used multiple tariff and non-tariff barriers to limit the growth of American agricultural imports for decades, according to the U.S. Congressional Research Service.

Trump has been threatening to intervene in currency markets to weaken the U.S. dollar in an effort to make American exports more competitive, but the Japanese have strengthened the yen by about 9 percent to the dollar since Trump took office in 2017.

Demanding progress on trade negotiations, the Trump administration on May 17 proclaimed that imports of motor vehicles and auto parts posed a national security threat and directed the U.S. Trade Representative to resolve the issue with Japan and the European Union.

Japanese Foreign Direct Investment (FDI) in the United States totaled $469.1 billion in 2017, with manufacturing accounting for the largest share at $157.3 billion. That compares to just $129.1 billion of U.S. FDI in Japan, with $64.1 billion concentrated in finance.

The Trump administration has highlighted that U.S. goods and services trade with the EU totaled nearly $1.3 trillion in 2018, with $575 billion in exports and $684 billion in imports. But he has blamed unfair EU trade practices, particularly by German autos, for the $169 billion U.S. goods deficit with the EU.

According to the U.S. Congressional Research Service, the highly competitive U.S. agricultural sector has a $10 billion trade deficit with Europe, due to commercial and cultural practices enshrined in EU laws and regulations that limit U.S. imports to $14 billion.

The EU has demanded the exclusion of agriculture from the trade talks because it is “a sensitivity for the EU side.” But the Congressional Research Service estimates that the average tariff rate across all U.S. agricultural imports is roughly 12 percent, far below the EU average of 30 percent.

The Trump administration has also been criticized for an import tariff imbalance; the United States imposes just 2.5 percent tariffs on EU passenger vehicle imports, versus the EU’s 10 percent tariff on U.S. imports.

America historically has been reluctant to ramp up a trade war with the 28-nation bloc due to a delicate balance of maintaining the North Atlantic Treaty Organization’s (NATO) mutual defense alliances. But with the United Kingdom set to “Brexit” out of the EU on October 31, concerns are rising that the United States will “exit” NATO due to France, Germany, and Canada refusing to meet the required 2 percent of annual GDP defense spending.

NATO Secretary-General Jens Stoltenberg held a press conference on August 6 to deny that NATO was making contingency plans for a U.S. withdrawal. Stoltenberg, in a calming voice stated, “A strong NATO is good for Europe, but it’s also good for the United States.” He added, “It’s a great advantage for the United States to have 28 friends and allies.”