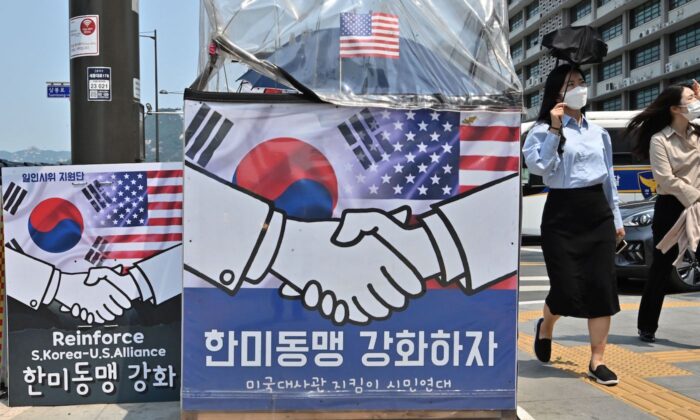 Pedestrians walk past banners calling for strengthening of the South Korea-US alliance near the U.S. embassy in Seoul on May 20, 2022, ahead of U.S. President Joe Biden's visit to South Korea. (Jung Yeon-je/AFP via Getty Images)
World

The United States and China are seeking to strengthen their ties with South Korea’s new conservative government.

U.S. President Joe Biden lands in South Korea late Friday as part of a six-day trip that also includes Japan. Biden has of course, in advance, reaffirmed the need for a strong U.S.-South Korea alliance.

On May 10, Yoon succeeded Moon Jae-in as the 20th president of South Korea. In the afternoon, Yoon met with China’s Vice President Wang Qishan at the presidential palace in Yongsan, Seoul.

Wang expressed during the meeting the yearning to “mutually promote the strategic partnership between China and South Korea.”

Wang’s presence at the inauguration ceremony demonstrated how China highly values Korea-China relations, said Yoon, who had received a personal letter and a phone call from Chinese leader Xi Jinping after he was elected president.

China has upped its diplomatic efforts with Wang leading a special delegation representing Xi for Yoon’s inauguration, according to official Chinese media.

A May 10 article of China News Weekly, that was cited in multiple Chinese media, said the Chinese side adopted a higher diplomatic profile than the U.S. and Japanese guest lists that appeared at Yoon’s inauguration.

The presence of a senior Chinese Communist Party (CCP) leader, such as Wang, at the inauguration is seen as a rarity especially with the pandemic breaking out, said the state-run media.

For decades, the CCP conventionally appointed officials at the level of vice-premier or state councilor to participate in South Korean presidential inaugurations.

Li Jiacheng, an associate professor at Liaoning University’s Institute of International Economics and Political Science, is quoted in the article, as saying, this year marks the 3oth anniversary of the establishment of diplomatic relations between China and South Korea, and that China intends to anchor stable Sino-Korean relations.

As for the cause for China’s proactive measures towards South Korea’s new administration, the above-mentioned China Newsweekly article gave an explanation. It said that former South Korean President Moon Jae-in, since assuming the post in May 2017, “had been actively mending and developing Sino-South Korean relations, which had previously plummeted due to the country’s deployment of the THAAD anti-missile system.”

On March 7, 2017, days before Park Geun-hye stepped down due to being impeached, the U.S. military stated that it had begun deploying the THAAD missile defense system in South Korea in order to intercept North Korea’s missiles and maintain security on the Korean Peninsula, despite China’s long-standing opposition.

The issue facing Beijing is that Moon’s successor, Yoon is expected to adhere to a pro-U.S. policy. In the advance of the elections, he promised a tougher stance on North Korea and a stronger commitment to working with the United States on security.

The China Newsweekly article stated that the Sino-Korean relationship is facing grave challenges in terms of political cooperation.

South Korea has long relied on the United States for security and on China for trade leaving it in a situation where it has strived to separate politics from business.

But Washington’s escalating competition with Beijing on technology issues, along with shifting geopolitical prospects, has left South Korea in a delicate balancing game between its longtime ally and its largest trading partner.

Chinese official media the Economic Daily, published an article on May 28, 2021, that said the semiconductor industry has emerged as a strategic bargaining chip for South Korea.

Prior to that, the Biden administration had been rallying allies and partners to create a global supply chain that was less dependent on China.

US Enhances Alliance with South Korea

After winning the election, Yoon sent a delegation to the United States and as a response, U.S. President Joe Biden also scheduled his current visit to South Korea.

The spokesman, who spoke on condition of anonymity, said: “the U.S.-ROK alliance is the linchpin of peace, security, and prosperity in the Indo-Pacific”.

The spokesman added that the United States expects continued cooperation between both sides in addressing the most pressing global challenges.

Ned Price, press secretary of the State Department, said in a press briefing, “there is an enduring quality to our alliance with the Republic of Korea, and it’s enduring in the sense that it is an alliance that is built on shared interests and shared values. It is not predicated on who’s in office at any given time.”

Some analysts believe that Biden’s choice of visiting Korea before Japan during his current trip is a signal of the U.S. prioritizing ties with the new South Korean government.

But Biden is scheduled to hold a summit meeting with both Yoon and Japanese Prime Minister Fumio Kishida to discuss deepening security alliances, strengthening economic ties, and the issue of North Korea.