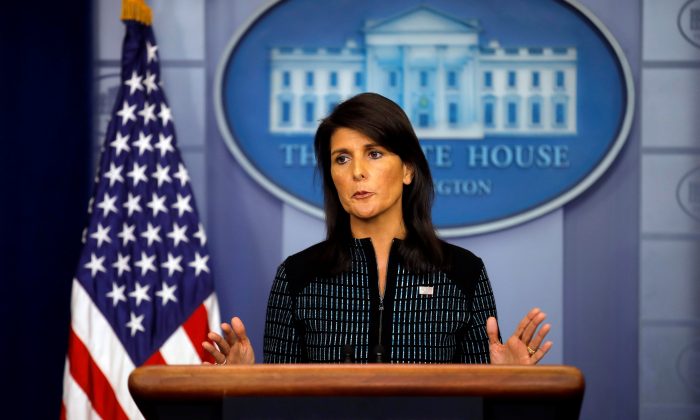 US Ambassador to the UN, Nikki Haley attends the daily briefing at the White House in Washington on Sept. 15, 2017. (REUTERS/Carlos Barria)
International

US Ambassador Haley: UN Has Exhausted Options on North Korea

WASHINGTON—U.S. Ambassador to the United Nations Nikki Haley said on Sunday the U.N. Security Council has run out of options on containing North Korea’s nuclear program and the United States may have to turn the matter over to the Pentagon.

“We have pretty much exhausted all the things that we can do at the Security Council at this point,” Haley told CNN’s “State of the Union,” adding that she was perfectly happy to hand the North Korea problem over to Defense Secretary James Mattis.

As world leaders head to the United Nations headquarters in New York for the annual General Assembly meeting this week, Haley’s comments indicated the United States was not backing down from its threat of military action against North Korea.

North Korea launched a missile over Japan into the Pacific Ocean on Thursday in defiance of new U.N. Security Council sanctions banning its textile exports and capping imports of crude oil.

The Chinese regime has urged the United States to refrain from making threats to North Korea. Asked about President Donald Trump’s warning last month that the North Korean threat to the United States will be met with “fire and fury,” Haley said, “It was not an empty threat.”

“We’re trying every other possibility that we have, but there’s a whole lot of military options on the table,” she said.

Pyongyang has launched dozens of missiles as it accelerates a weapons program designed to provide the ability to target the United States with a powerful, nuclear-tipped missile.

North Korea said on Saturday it aimed to reach an “equilibrium” of military force with the United States.

Trump plans to meet with South Korean President Jae-in Moon on the sidelines of the U.N. General Assembly.

“I spoke with President Moon of South Korea last night. Asked him how Rocket Man is doing. Long gas lines forming in North Korea. Too bad!” Trump said in a Twitter post on Sunday morning.

White House national security adviser H.R. McMaster said on Friday, after the latest North Korean missile launch, that the United States was running out of patience: “We’ve been kicking the can down the road, and we’re out of road.”

On Sunday, he warned of imminent danger from Pyongyang.

“This regime is so close now to threatening the United States and others with a nuclear weapon, that we really have to move with a great sense of urgency on sanctions, on diplomacy and preparing, if necessary, a military option,” McMaster told the “Fox News Sunday” program.

Mattis has warned the consequences of any military action would be “tragic on an unbelievable scale” and bring severe risk to U.S. ally South Korea.

Democratic U.S. Senator Dianne Feinstein said on Sunday that Trump should not rule out talks with North Korea before it agrees to end its nuclear program.

“I think that North Korea is not going to give up its program with nothing on the table,” she said on CNN.

Feinstein said that a freeze of both its nuclear program and missile arsenal, rather than ending them, would be more palatable to North Korea and to China, who fears the U.S. goal is toppling Kim.

The United States still wants a peaceful solution and has been waiting for the North Koreans to indicate they are ready to talk, Secretary of State Rex Tillerson said on CBS’ “Face the Nation.”

“We have tried a couple of times to signal to them that we’re ready, when they’re ready,” he said. “And they have responded with more missile launches and a nuclear test.”