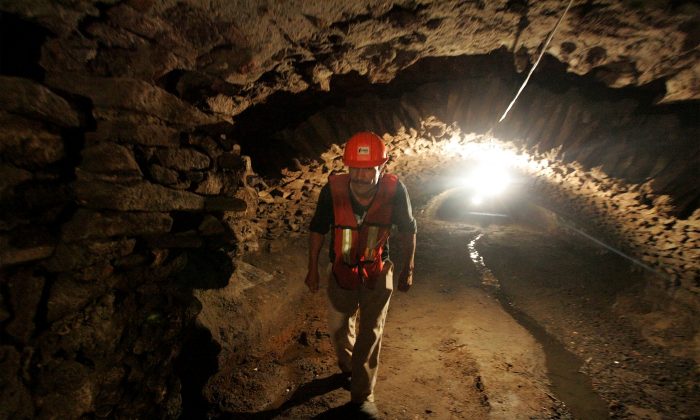 A worker walks through one of the recently discovered ancient tunnels underneath the city of Puebla, Mexico, Thursday, Sept. 3, 2015. (AP Photo/Joel Merino)
archaeology

Talk of a maze of underground tunnels beneath the Colonial city of Puebla in Mexico has long been disregarded as mere urban legend. However, city authorities have now confirmed that these tunnels exist.

Said to date back as early as 1531, when the city was founded, the subterranean tunnels are believed to reach up to 6 miles (10 kilometers) in length beneath the historic center of the city.

After removing tons of earth and mud, investigations revealed a line of tunnels running from Fort Loreto to the Fort of Guadalupe in the upper part of town, and from Fort Loreto to the District of San Jose, located in the center of the city. A third line was discovered from the Fort of Guadalupe to Los Remedios Church, where the defense of Puebla took place against the invading French Army in 1862. However, there are believed to be many more.

“In the urban narrative or urban legends there was word of the tunnels in Puebla, but nobody knew where they were, they had never been seen,” the manager of Cultural Heritage and Historical Center of Puebla, Sergio Vergara Bermejo, told El Universal.

Initial analyses suggest the tunnels are between 300 and 500 years old. “They are from the foundation of the city,” Bermejo told El Universal. “Churches were communicating in secret alleys, there is a network of the main monasteries, from Santo Domingo, San Agustin, La Merced to San Javier.”

Mexico News Network reported that the tunnels would also have been used during the Battle of Puebla in 1862, when Mexican troops faced the French army. The battle ended in a victory for the Mexican Army over the occupying French forces.

Founded in 1531, Puebla is one of the oldest cities in Mexico and is among the five most important Spanish colonial cities in the country. Due to its rich history and its impressive architectural styles, Puebla was named a World Heritage Site in 1987.

“Puebla in the 17th century was flooded and half the city was covered in mud, the city we walk is [from] the 18th and 19th century, the bottom are the treasures that we must preserve,” said Bermejo.

The mayor of Puebla, Tony Gali, has now earmarked 5 million pesos (approximately $295,000) for the restoration of the tunnels. The plan is to transform the newly discovered subterranean world into a tourist attraction so visitors can learn more about the stories and legends of this historic city.

For now, the exact location of the tunnels is being kept secret.

This article was republished with permission from Ancient Origins, Ancient-Origins.net