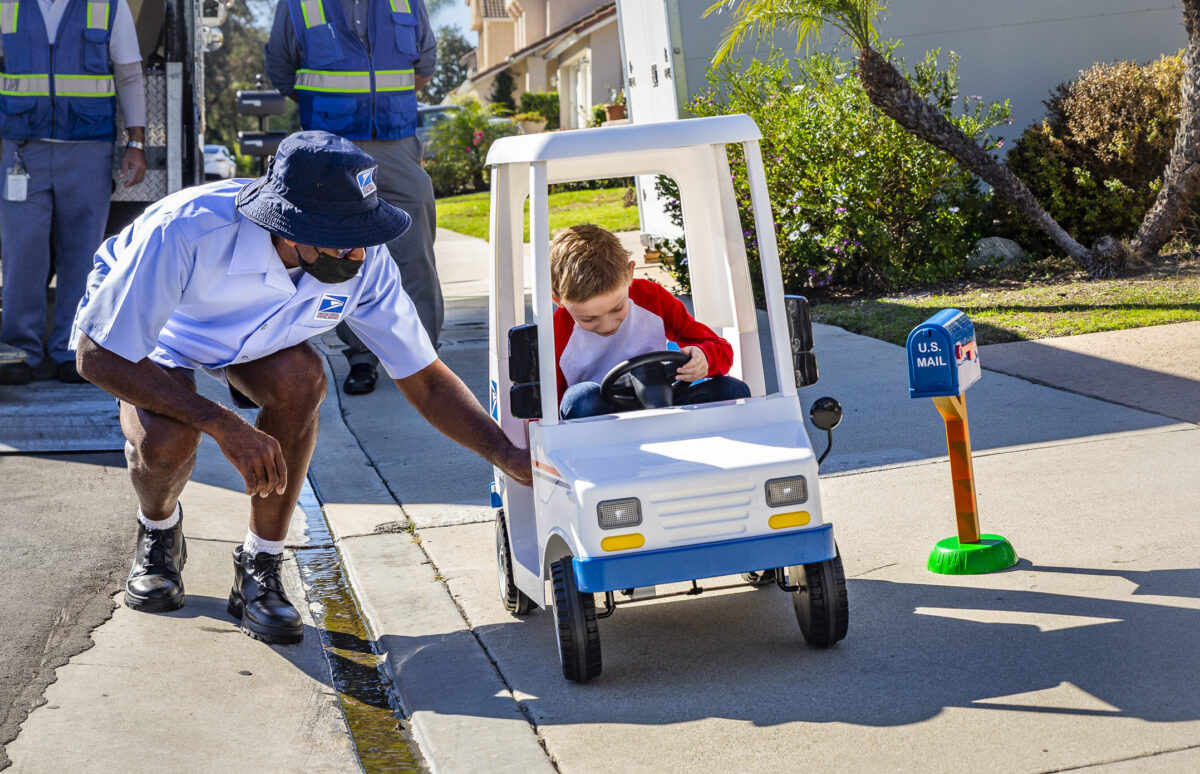 LAGUNA NIGUEL, Calif.—Before doctors diagnosed seven-year-old Jacob Hayward with stage four Wilms Tumor, a type of kidney cancer most commonly found in children, he would dress up like a mailman every day to greet the carrier, and then hand the bundle of mail to his mom and dad.

Jamie Hayward, Jacob’s mother, said he immediately runs downstairs to catch the mailman as soon as he hears the truck.

“His big thing has always been the mailbox,” Jared Hayward, father of Jacob, told reporters. “I mean, he’s got a U.S. postal tent upstairs.”

Every day, checking the mail was part of Jacob’s routine until he became sick.

On March 11, 2020, eight days before Gov. Gavin Newsom declared a statewide shelter-in-place order due to the rising COVID-19 cases in California, Jacob was diagnosed with kidney cancer, changing the Hayward family’s world just before the pandemic changed the world.

Over the last two years, Jacob has endured approximately 50 treatments of chemotherapy, eight treatments of radiation, and two major surgeries that removed 20 percent of one of his lungs, as well as the kidney impacted by the tumor.

If that wasn’t enough for Jacob to tackle, he powered through another 12 operations, over 50 transfusions, and finished with a stem cell transplant that forced him into 35 days of isolation at Children’s Hospital of Orange County.

While Jacob was recovering from the transplant, the hospital staff decorated his door with a postal-like theme and stationed a hand-made mailbox outside his room.

The hospital staff and other kids near his room would write him letters and drop them off in the mailbox.

“That was his only way of communication while he was in isolation,” Mrs. Hayward said. “It was exciting for him every day to check the mailbox and get his own personal mail.”

Jacob’s last therapy session was nearly six months ago and is cancer-free today, according to Mrs. Hayward.

Just before Christmas 2021, Jacob, who was having a rough morning, heard the mail truck turning the corner on his street from inside his house.

Since the Haywards live in the first house on their block, he ran downstairs and rushed outside with his mother and five-year-old sister, Ava, to greet the mail carrier, otherwise known as “Van the Mailman.”

Van Singletary, who has been a mail carrier for the United States Postal Service (USPS) for over thirty years, had delivered letters, bills, and all sorts of parcels to the Haywards and their neighbors long before Jacob was even born.

However, the two formed an unlikely bond after Jacob’s mother made a special request on that warm winter’s day.

After wishing Singletary a Merry Christmas, Mrs. Hayward said Jacob has always dreamed about becoming a mailman and asked if they could take a tour of the post office.

“There’s always been an excitement for seeing the postal trucks come through, but they never actually say ‘I would like to be a mailman,'” Singletary told reporters.

And because of “safety and security,” Singletary had to break the news to Mrs. Hayward and the children that a tour may not be possible.

That’s when Mr. Hayward said, “she went into mama bear mode,” and told Singletary about the last 24 months of their lives.

At that moment, Singletary told Jacob, Ava, and Mrs. Hayward to show up at the post office the next day, and he’ll make sure he gets a tour.

And Jacob and his family did just that.

Singletary said when the Haywards arrived at the Laguna Niguel Post Office, the staff greeted them with a tour, heard Jacob’s story, and helped Jacob personally put a piece of mail into his bag that was delivered later that day.

“There was not a dry eye in the house,” Singletary said. “My coworkers afterward told me that was the motivation and energy they needed to help get through the rest of the season.”

What initially started as a wish for Jacob to tour the post office turned into a blessing for Singletary and his coworkers that day, he said.

But Singletary and USPS didn’t stop there.

On January 24, Singletary, along with USPS officials, friends, and family, surprised Jacob at the Haywards’ house with a postman uniform, a mini mailbox, and a battery-powered mail truck that cruises at about two-and-a-half miles per hour.

USPS officials also gifted him and Ava with a stuffed donut pillow with chocolate on one side and rainbow sprinkles on the other.

After taking his new truck for a quick spin with Ava, Linda Crawford, a USPS district manager, revealed the last surprise for Jacob.

Crawford and USPS officials officially dubbed Jacob an “honorary mail carrier for the City of Laguna Niguel,” and gifted him a postal cachet and his own set of envelopes to commemorate the day.

“Today is really Jacob’s day,” Crawford said. “He is forever a mail carrier.”

Crawford helped Jacob stamp the envelopes with the cachet as his sister watched.