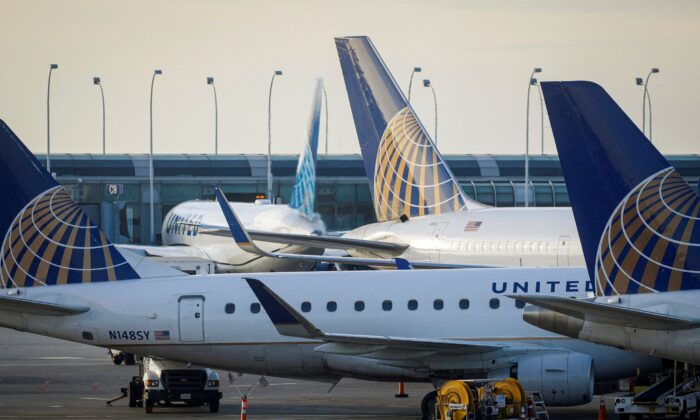 United Airlines planes are parked at their gates at O'Hare International Airport ahead of the Thanksgiving holiday in Chicago, Ill., on Nov. 20, 2021. (Brendan McDermid/Reuters)
Companies

The Chicago-based carrier said the latest wave of the health crisis has depressed near-term demand even as bookings for the spring and beyond remain strong.

United said its priority is to match capacity with demand. As a result, its 2022 capacity is now projected to be lower than in 2019, instead of growing 5 percent as estimated earlier.

It expects to restore 82 percent to 84 percent of pre-pandemic capacity in the quarter through March, with revenue recovering to just 75 percent to 80 percent of 2019 levels.

Costs this year are now expected to be higher than in 2019, instead of going down.

United’s shares declined about 2.5 percent to $43.31 in extended trading.

Winter storms and an increase in COVID-19 infections among employees have led to mass flight cancelations. In one day alone, nearly one-third of United’s workforce at Newark Liberty International Airport called in sick. Last week, the carrier said 3,000 employees were infected with the virus.

In response, carriers have cut their flight schedules and are offering crew members not scheduled to work incentives to pick up additional shifts and trips.

To ease staffing issues, United is offering its pilots premium pay through the end of the month.

The incentives and flight cancelations are further inflating industry costs, which have gone up in the past year with efforts to ramp up operations.

United estimated current-quarter costs to be 14 percent to 15 percent higher than in the same period in 2019.

Analysts at Jefferies said cost pressures are expected to be a “significant headwind” for the carrier.

United said its Boeing 777-200 planes equipped with Pratt & Whitney (PW) engines would begin to return to service in the current quarter.

It had to ground the wide-body jets after a United flight to Honolulu suffered an engine failure and made an emergency landing last year in Denver.

On an adjusted basis, the carrier reported a loss of $1.60 per share for the quarter through December, compared with a loss of $7.00 per share a year ago. Analysts surveyed by Refinitiv, on average, had expected a quarterly loss of $2.11 per share.

Fourth-quarter revenue came in at $8.19 billion, compared with $3.4 billion a year ago, beating the consensus estimate of $7.97 billion.

United will discuss the results on a call with analysts and investors on Thursday morning.