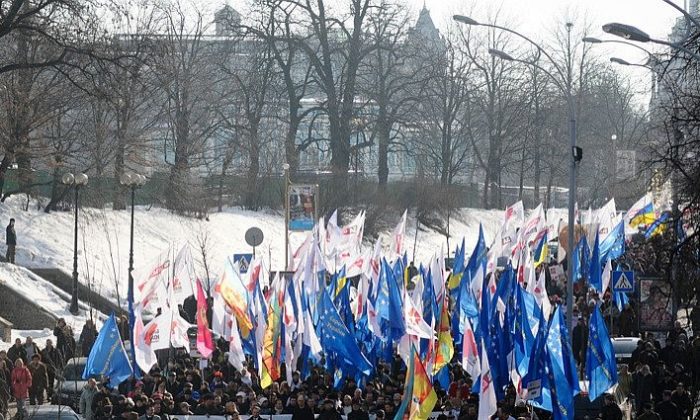 An opposition party meeting against president Viktor Yanukovych's politics was held in Kyiv, Ukraine on Feb. 25, 2013. Yanukovych answered questions from citizens that seemed to be written by the government, in a "dialogue with the country" session, attracting the scorn or some Ukrainians.(Vladimir Borodin/The Epoch Times)
Europe

KYIV, Ukraine—Ukrainian President Viktor Yanukovych organized a “dialogue with the country” on Feb. 25 to celebrate the third anniversary of his inauguration. It was expected to be a form of communication between ordinary people and the president and was broadcast online.

In the traditional style of the Soviet leaders, it appeared staged.

No impromptu questions, only speeches and questions from supposedly ordinary citizens that sounded rehearsed—and, most importantly, no criticism. Yanukovych has been the butt of jokes after some fumbled public speeches in the past, though it seems his press secretaries prepared well for the event and it came off with neither fumble nor foul.

Places where people could assemble to ask questions were not announced. Journalists could not reach some locations, as they were barred from entrances by military guards, according to news portal Comments UA.

A variety of questioners—a member of the clergy, a teacher, military men, an expecting mother, and others—all stood straight and appeared to recite learned text. They uniformly thanked Yanukovych, praised his new laws or regulations, and sometimes asked for something.

The president was highly criticized in social media and by bloggers after his “dialogue.”

“The king has spoken with the country without the country,” commented Facebook user Tana Sokal.

“Friends, I could not believe my eyes. This what we saw today looks like television footage of 1970s, when party leaders showed people how good our life is. Seeing this, I asked myself if it is the future? I’m scared!” commented another Facebook user Istvan Nemes.

Many ordinary people and politicians commented on a post-communistic, pathetic style of program and compared it to online conferences organized for Russians by President Vladimir Putin.

Although many across the nation reacted negatively to the “dialogue,” at least five of the main television stations (ICTV, Vikna, LTV, TSN, and Podrob Nosti) broadcast positive responses.

A Freedom House report on the state of democracy in Ukraine in 2012 states: “Developments in Ukraine’s media environment over the past year reinforce concerns that space for freedom of the press is shrinking and that the independence of many media outlets is compromised. Worsening trends include corruption and declining independence of media from political and business influence.”

Several days ago, Ukrainian magazine Focus published several articles and graphics about the president’s income and spending. For reasons unannounced, the magazine withdrew the issue from circulation—but not before its PDFs made it to social media. The withdrawal only drew even more attention to these materials.

Freedom House’s report states that not only Ukraine’s media has suffered from the weakening of democracy. There has been a marked increase in corruption, selective prosecution cases, and nepotism in the higher ranks of government—particularly a concentration of power in the hands of Yanukovych’s family.

“The term ‘familyization’ was commonly used by interlocutors, implying that President Yanukovych’s family has not only benefited personally from his presidency but is increasingly at the center of power and governance,” states the report.

After Yanukovich was inaugurated in 2010, his elder son started to manage large capital enterprises—audit company Pricewaterhouse Coopers announced the actives of his son’s company reached $1.7 billion in 2011, according to news portal Korrespondent.

Meanwhile, the president talks of Ukraine’s progression on the road to democracy, and his readiness to make reforms required by the European Union for integration.