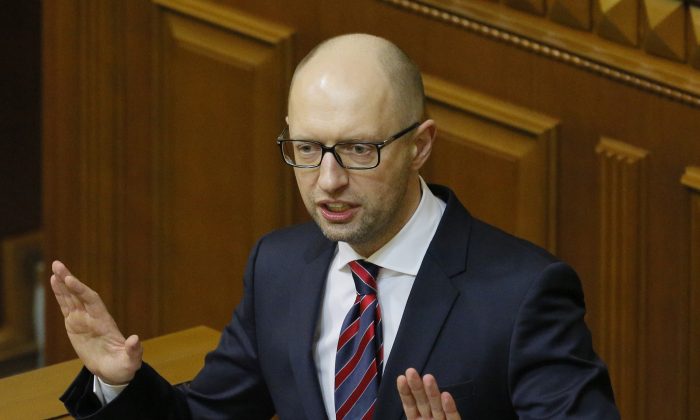 MOSCOW—The government of Ukrainian Prime Minister Arseniy Yatsenyuk survived a no-confidence vote on Tuesday though a majority of lawmakers harshly criticized its work.

The vote reflected simmering political tensions amid Ukraine’s economic troubles that have eroded public support for Yatsenyuk’s Cabinet. The failure to pass the motion reflected lawmakers’ fears that it could lead to the collapse of the ruling coalition and early elections.

Earlier in the day, Ukraine’s President Petro Poroshenko called on the embattled prime minister to resign and for a new line-up of ministers to be appointed.

The tension between the government and the factions has become so high that it poses a threat to the coalition’s functioning.
— Petro Poroshenko, president, Ukraine

“The tension between the government and the factions has become so high that it poses a threat to the coalition’s functioning,” Poroshenko said in a statement.

Yatsenyuk defended his Cabinet’s performance during a raucous debate, saying that “hatred and anger are not emotions which should unite the political class.”

The no confidence motion got 194 votes in the Verkhovna Rada Tuesday, falling short of the 226 votes required to oust the Cabinet. Minutes before it, 247 lawmakers voted to consider the cabinet’s performance unsatisfactory.

Speaking before the vote, Yuri Lutsenko, who leads Poroshenko’s faction in parliament, harshly criticized Yatsenyuk and urged him to step down.

“70 percent of people want you to resign,” he said. “The country can’t tolerate the government’s inaction any more.”

Despite harsh rhetoric, both Poroshenko and Yatsenyuk are keen to avoid snap elections since their political parties have fallen in recent opinion polls as public frustration mounts with the government’s lack of progress.

The blocs led by the prime minister and the president are the largest in parliament and they, along with a collection of other political factions, have been in a tug-of-war for influence that has stymied reforms.

Yatsenyuk became prime minister after the country’s ostentatiously corrupt and Russia-friendly president was chased from power in February 2014 following massive protests. Poroshenko was elected several months later with broad support and a seal of approval from Western leaders.

However, a string of very public spats between Ukrainian lawmakers, often involving members of Yatsenyuk’s and Poroshenko’s blocs, have strained the public patience and eroded the confidence of the West.

Last week, International Monetary Fund head Christine Lagarde threatened to halt the delivery of another installment of Ukraine’s $17.5 billion aid package that the country is counting on to keep the economy afloat.

Two well-respected reformers resigned in the past week, citing their disenchantment with the government’s cronyism and engrained corruption.

Aivaras Abromavicius stepped down on Feb. 3 as the economy minister and said he and his team received pushback on their reform efforts from government leaders including members of Poroshenko’s party.

Vitaly Kasko resigned on Monday as Ukraine’s deputy chief prosecutor, accusing Prosecutor General Viktor Shokin of derailing anti-graft cases. Poroshenko on Tuesday asked the widely criticized Shokin to step down, but it wasn’t immediately clear if he did so.

“It’s important to restore the confidence of the Ukrainian people in the justice system, but clearly, there’s an immense amount of work yet to be done in countering corruption, including in the prosecutorial service,” he said. “We recognize that there’s a lot more work to be done. “