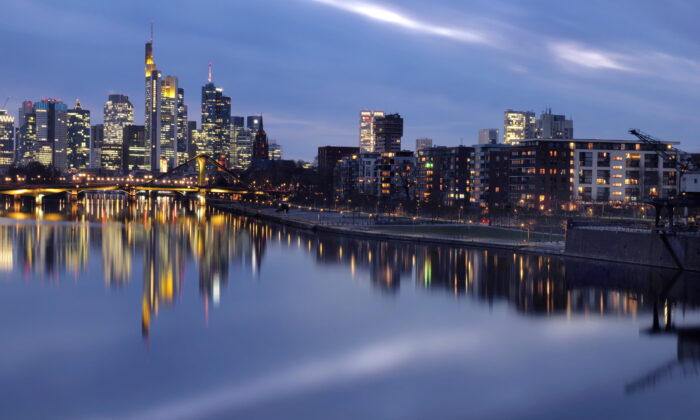 The skyline with its financial district is photographed as the spread of the coronavirus disease (COVID-19) continues during an extended lockdown in Frankfurt, Germany, on Jan. 14, 2021. (Kai Pfaffenbach/Reuters)
Economy

BERLIN—German business morale in August fell to its lowest reading since June 2020 amid high uncertainty due to the Ukraine war, the resulting energy crisis, and fears of an economic downturn in the third quarter, a survey said on Thursday.

The Ifo institute’s closely watched business climate index fell for a third consecutive month but less than expected to 88.5, from an upwardly revised reading of 88.7 in July. A Reuters poll of analysts had pointed to an August reading of 86.8.

Analysts called the small month-on-month change a positive surprise but stuck to their warnings about a coming recession.

“Things could well have been worse,” said VP bank chief economist Thomas Gitzel. “But there is no reason to breathe a sigh of relief.”

“Uncertainty among the companies remains high, and the German economy as a whole is expected to shrink in the third quarter,” said Ifo President Clemens Fuest.

Europe’s largest economy will likely shrink by half a percentage point in the third quarter, predicted Ifo head of surveys Klaus Wohlrabe.

The German economy grew 0.1 percent in the second quarter, the statistics office said earlier on Thursday, beating expectations of stagnation in line with a flash estimate in July.

The business climate in manufacturing remained unchanged in August, while service providers viewed the current situation as somewhat better, said the survey of about 9,000 businesses.

In a positive sign, the number of companies complaining of material and supply bottlenecks was at its lowest in well over a year, at 62 percent, from 73 percent the month before, Wohlrabe told Reuters.

Commerzbank chief economist Joerg Kraemer pointed out that the index was still in recession territory and that the gas crisis was taking its toll on companies as well as consumers.

“We expect the second half of the year and the first quarter of next year to be more recessionary than ever,” he said.

European countries have been racing to fill their gas storage facilities as Russian energy giant Gazprom has reduced supply via the Nord Stream 1 pipeline, increasing concerns about a potential gas shortage come wintertime.