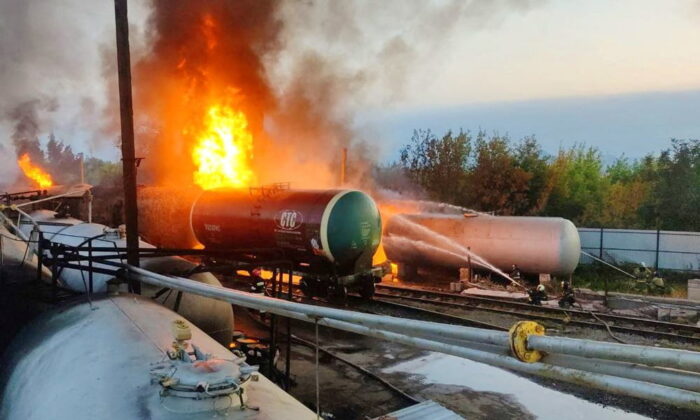 Firefighters gather near tank cars as they work to extinguish a fire at an oil depot in the Budyonnovsky district of Donetsk, Ukraine on July 26, 2022. (Press Service of Emergencies Ministry of Donetsk People's Republic/Handout via Reuters)
Russia-Ukraine War

A fire broke out overnight at an oil depot in Russian-controlled territory of eastern Ukraine after Ukrainian forces shelled the city of Donetsk, the head of the city administration said on Tuesday.

“As a result of overnight shelling in the Budennovsky district, there was a fire at a fuel storage warehouse,” Donetsk mayor Alexey Kulemzin said in a post on the Telegram social network.

There were no casualties as a result of the blaze, Donetsk’s emergency services said. The fire was extinguished around 1000 a.m. local time, Kulemzin said.

Reuters could not verify the reports or the cause of the fire.

Footage shared on social media showed a fire blazing near oil tanks on railway tracks at the storage depot.

Donetsk is the capital of the separatist Russian-backed “Donetsk People’s Republic”—a breakaway entity in Ukraine’s Donbas region, recognised only by Russia, Syria, and North Korea.