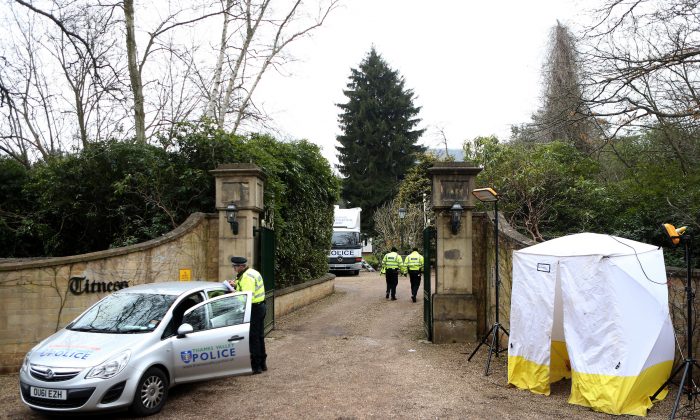 A police car and a police tent are positioned outside the gates of the house of Russian tycoon Boris Berezovsky in Sunningdale near Ascot in Berkshire, southwest of London, on March 25, 2013. (Ben Stansall/AFP/Getty Images)
UK

LONDON—British police said on Friday they had launched a murder investigation following the death this week of a Russian associate of late tycoon Boris Berezovsky.

“A murder investigation has been launched following the results of a post mortem into the death of 68-year-old Russian businessman Nikolai Glushkov,” London’s Metropolitan Police said, adding the cause of death was “compression to the neck”.

The police said in a statement that at this stage there was nothing to suggest a link to the attempted murders of former Russian spy Sergei Skripal and his daughter on March 4 or that poison was involved.

Earlier on Friday Russia’s Investigative Committee said it had opened a criminal investigation into both the attempted murder of Yulia Skripal and what it said was the murder of Glushkov. It also said it was ready to cooperate with British authorities on the two cases.

British Foreign Secretary Boris Johnson said on Friday it was “overwhelmingly likely” that Russian President Vladimir Putin himself had made the decision to use a military-grade nerve toxin to strike down Sergei Skripal.

London police said specialist counter-terrorism officers continued to lead the investigation into Glushkov’s death as a precaution due to the associations he was believed to have had.

‘Godfather of The Kremlin’

British interior minister Amber Rudd instructed police and intelligence services earlier this week to look at 14 deaths over recent years which were not originally treated as suspicious by police but where media allegations of Russian state involvement had been made.

Glushkov had worked for Russian airline Aeroflot and at Berezovksy’s LogoVAZ car company.

Berezovsky was found dead in March 2013 with a scarf tied around his neck in the bathroom of a luxury mansion west of London.

The 67-year-old tycoon had been one of Russia’s most powerful figures in the years after the collapse of the Soviet Union. Berezovsky was known as the “godfather of the Kremlin” before fleeing to London after a row with Putin in 2000, the year the former KGB officer became Russia’s president.

Britain granted Berezovsky political asylum three years later on the grounds that his life would be in danger if he went back home.

His family feared he might have been murdered by enemies in Russia, but British police and forensic experts concluded that Berezovsky had committed suicide.

A British judge in 2014 reached an open verdict on Berezovsky’s death, saying he could not be sure if the Russian killed himself at his former wife’s British home or was the victim of foul play.