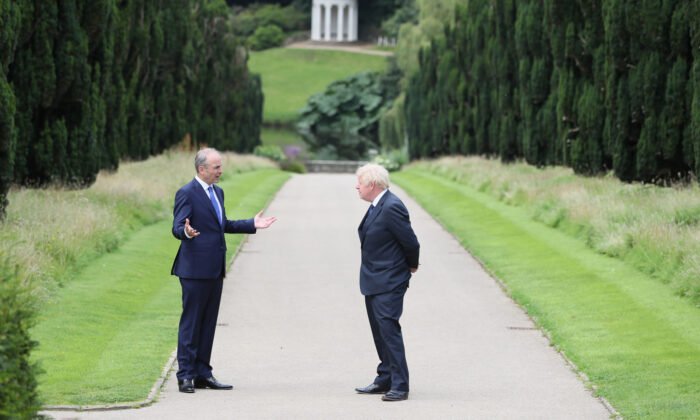 LONDON—Britain said on Tuesday it would take all necessary steps to protect peace in Northern Ireland as it urged the European Union to show new imagination in talks to resolve problems with post-Brexit trading rules.

London and Brussels have been trying for months to break the deadlock over the deal, which in effect created a customs border in the sea between Northern Ireland and the rest of the United Kingdom to preserve the province’s open land border with E.U. member state Ireland.

Britain wants a full overhaul of the agreement and has hinted at the possibility of unilaterally suspending part of it if no new deal can be reached with the E.U., while the E.U. is looking for changes within the terms of the existing deal.

“We will continue to talk with the E.U. but we will not let that stand in the way of protecting peace and stability in Northern Ireland,” said a British briefing document published on Tuesday to accompany the government’s new legislative agenda.

“We urge our partners in the E.U. to work with us, with new imagination and flexibility, to deliver that.”

A spokesman for Prime Minister Boris Johnson said no decisions on the next steps had been taken yet.

E.U. negotiator Maros Sefcovic later issued a statement that called on Britain to display its own creativity in search of solutions, but restated that the deal, known as the Northern Ireland Protocol, was not up for renegotiation.

“The protocol, as a cornerstone of the Withdrawal Agreement, is an international agreement. Its renegotiation is not an option. The European Union is united in this position,” he said.

The stalemate over the protocol is blocking the formation of a new executive in the British province after elections last week.

Irish nationalist Sinn Fein, which accepts the protocol given its goal of Irish unification, emerged as the largest party in the election, while the Democratic Unionist Party (DUP), which fears the protocol is eroding ties with the rest of the United Kingdom, tumbled to second place.

DUP leader Jeffrey Donaldson told BBC Radio he had spoken to Johnson on Tuesday and the British leader understood that the current position was not sustainable.

Johnson’s government has said it could be forced to act unilaterally to avoid a flare-up in political tensions that might threaten a 1998 peace deal that largely ended decades of sectarian violence between Irish nationalists and unionists.

In a call with Irish counterpart Micheal Martin on Tuesday, Johnson said the situation with the protocol was now “very serious” and the European Commission had not taken the steps necessary to help address the economic and political disruption on the ground.

“The prime minister reiterated that the UK government would take action to protect peace and political stability in Northern Ireland if solutions could not be found,” Johnson’s spokesperson said following the call.

Martin said he had warned Johnson against taking unilateral action. That warning was echoed by German Chancellor Olaf Scholz.

The Times of London reported on Monday that British Foreign Secretary Liz Truss was set to ditch large parts of the protocol after giving up on the E.U. talks.

However, the government did not announce any such detailed plans on Tuesday when it set out all the legislation it intends to introduce during the upcoming parliamentary year.

The DUP told Reuters that Britain’s Northern Ireland minister Brandon Lewis had not indicated any such plan to them during a meeting on Monday.

Tuesday’s briefing document said the London government would “take the steps necessary” to protect the peace agreement and meet the democratic obligations to Northern Ireland it set out in a separate 2020 deal.