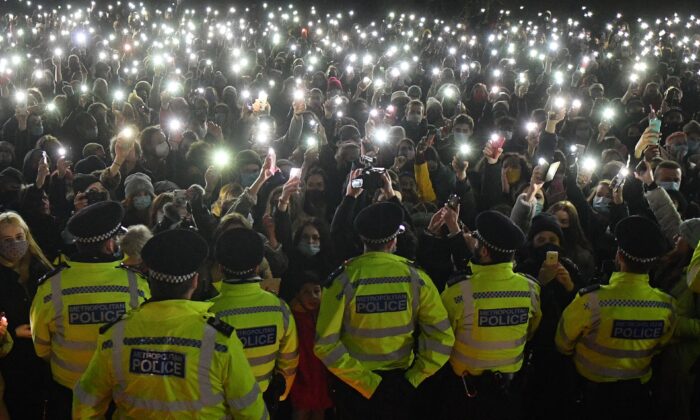 Police officers form a cordon as a crowd turn on their phone torches at a vigil for Sarah Everard on Clapham Common, south London, on March 13, 2021. (Justin Tallis/AFP via Getty Images)
UK

Six protesters who broke Britain’s lockdown laws to attend a vigil for Sarah Everard—who was abducted, raped, and murdered by a serving police officer in March 2021—will not face trial after the Crown Prosecution Service discontinued the case.

The vigil was originally organised by Reclaim These Streets to protest at violence against women after Everard’s body was discovered in a pond in a wood in Kent a week after she disappeared after walking home from a friend’s home near Clapham Common in south London after dark.

Reclaims These Streets cancelled the vigil after the Metropolitan Police said it should not go ahead because of the ban on assemblies of large groups of people during the COVID-19 pandemic.

But hundreds of people, mainly women, turned up at Clapham Common on March 13 for the candlelit vigil, which was controversially broken up by police officers, many of whom manhandled women who had been campaigning about violence against women.

A number of people were charged with fixed penalty notices for breaking lockdown rules, but six of them—Jade Spence, 33, Jenny Edmunds, 32, Dania Al-Obeid, 27, Vivien Hohmann, 20, Ben Wheeler, 21, and Kevin Godin-Prior, 68—refused to pay and were due to face prosecution in court.

‘Legal Test for Prosecution Not Met’

The Observer newspaper reported the CPS informed the protesters’ lawyers the prosecutions had been “discontinued” last week and the CPS confirmed, in a statement to PA, the “legal test” for prosecution had not been reached.

The CPS statement said, “We have a duty to keep cases under continuous review and we concluded that our legal test for a prosecution was not met.”

Al-Obeid told The Observer, “This is a victory in its own right but it doesn’t hold the Met accountable for their actions at the vigil or for their decisions to criminalise me and others for standing up and speaking out over a year later.”

But, unwilling to let it lie, al-Obeid is now suing the Met for its allegedly heavy-handed handling of the vigil and its conduct towards her.

In a statement the Met’s Assistant Commissioner, Louisa Rolfe, said: “We know how important it was for people to remember Sarah Everard and voice their anger … Officers took very seriously their duty to safeguard the public during the pandemic and to balance this with the rights of individuals.”

Wayne Couzens, 49, pleaded guilty to rape and murder and was given a whole life term.

It emerged that he had shown Everard his warrant card and told her she was breaking lockdown rules and then handcuffed her in order to abduct her.