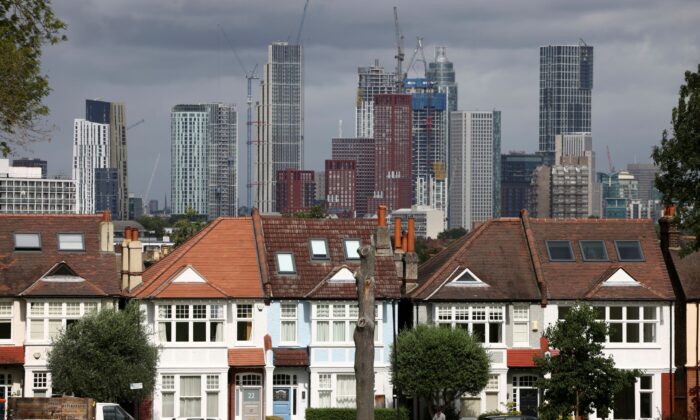 High-rise apartments under construction can be seen in the distance behind a row of residential housing in south London, Britain, on Aug. 6, 2021. (Henry Nicholls/Reuters)
Economy

House prices stood 11.2 percent higher than their level in January 2021, the fastest annual growth since June and again outstripping the consensus forecast for a rise of 10.8 percent.

Other surveys have also pointed to strong house price growth, even after the expiry of temporary tax breaks on property purchases during the pandemic.

As in other countries, British house prices surged during the pandemic as people rushed to move to bigger homes with gardens. Nationwide said demand was likely to cool this year.

“Reduced affordability is likely to exert a dampening impact on market activity and house price growth, especially since household finances are also coming under pressure from sharp increases in the cost of living,” said Robert Gardner, Nationwide chief economist.

Consumer price inflation hit an almost 30-year high of 5.4 percent in December and looks set to peak at around 6 percent in April, according to the Bank of England, which is due to publish mortgage lending data at 0930 GMT on Tuesday.

“All told, then, we think house price growth will fail to maintain its recent momentum, with month-to-month gains averaging just 0.2 percent in the first half of this year.”