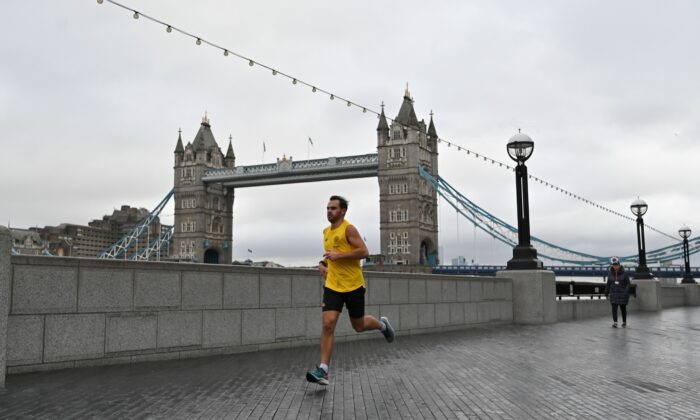 A jogger runs along the bank of the River Thames with Tower Bridge in the background in London on Jan. 12, 2021. (Justin Tallis/AFP via Getty Images)
Mind & Body

The British government is piloting a new app that will offer incentives such as vouchers for shops, theme park passes, and cinema tickets for people who eat healthily and exercise more.

The town of Wolverhampton was chosen for the pilot because of its population’s major weight issues. A 2014 survey estimated that 70 percent of adults in the city are obese or overweight and a third of residents are classed as being physically inactive. According to the British Heart Foundation, Wolverhampton’s child obesity is above the national average with 40 percent of year six children in the city classified as overweight.

The pilot is part of the government’s healthy weight strategy, and the new scheme will be part of the Office for Health Improvement and Disparities’ drive to use digital technology to improve physical health and prevent conditions before they develop.

Health and Social Care Secretary Sajid Javid said the pilot is “an exciting opportunity” to see how the government “can empower people to make healthy changes to their lifestyle,” and encouraged all adults in Wolverhampton to come forward and register their interest.

With obesity-related illnesses costing the NHS £6 billion ($8 billion) a year, the scale of the challenge has been highlighted by COVID-19 disproportionately affecting people who are overweight.

However, some have criticised the measures.

Christopher Snowdon, head of lifestyle economics at the think tank Institute of Economic Affairs, wrote in The Spectator that the pilot was a “paternalistic social credit system.”

“Before you know it, we will have a paternalistic social credit system that is wide open to low-level fraud and that redistributes wealth up towards the already health-conscious middle classes,” said Snowdon.

“The app could easily be adapted to take account of the consumption—or at least purchase—of alcohol, tobacco, or anything else the Office for Health Promotion disapproves of, with citizens rewarded or penalised as it sees fit,” he added.

However, Sir Julian Le Grand, professor of social policy at the London School of Economics, told The Epoch Times that he believes a state intervention for obesity is justified.

“The thing that I like is that it is positive incentives. I wouldn’t justify every kind of helpful friend intervention particularly if it was in some sense coercing people. In this case, it is basically nudging people to move in a particular direction. That seems to me to be legitimate. It still gives them an element of autonomy, where coercing ways of doing things like banning or regulating things would not,” said Le Grand.

Dolly Theis, a doctorate student at Cambridge University’s MRC Epidemiology Unit, told The Epoch Times that the UK government has introduced another obesity intervention that relies heavily on getting individuals to change their own behaviour, even though the environment and circumstances many people live in make that very difficult.

“Our research showed that government has introduced many of these types of policies over the last 30 years, despite evidence showing that they are less likely to work or be equitable,” she said.

The UK government has proposed 689 wide-ranging policies to tackle obesity in England but has not yet successfully and consistently reduced obesity prevalence.

“The message it sends is that people are the problem if they don’t work, but in reality, if the government wants to tackle obesity, it needs to provide equitable support and help create an environment and food system that make good health easy for everyone,” said Theis.