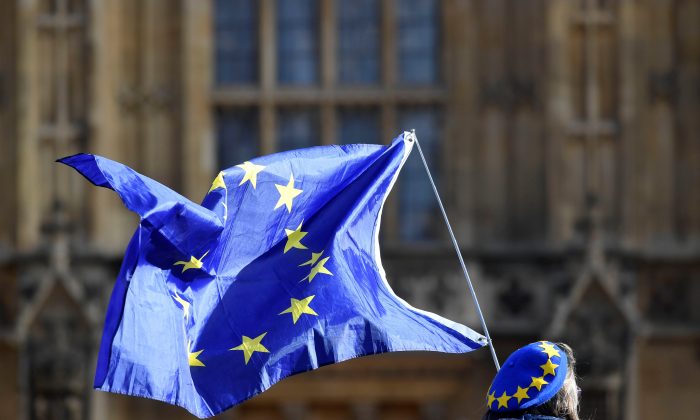 An anti-Brexit demonstrator waves a EU flag outside the Houses of Parliament in London, Britain, January 30, 2018. (Reuters/Toby Melville)
UK

UK and EU Set for Clash Over Citizens’ Rights

WUHAN, China—Prime Minister Theresa May has warned that European citizens arriving in Britain after Brexit next year may lose some rights, setting up a clash with the European Union over their treatment during any transition period.

Curbing immigration was a key reason why Britons voted to leave the EU in 2016, following a large influx of EU citizens, especially from poorer countries in eastern Europe.

The European Union has offered Britain a status quo transition until the end of 2020 after Brexit. The bloc wants its three million citizens to remain eligible for all the same rights until the end of that period.

But May has suggested EU citizens coming to Britain after March next year will be treated differently.

“I’m clear there’s a difference between those people who came prior to us leaving and those who will come when they know the UK is no longer a member of the EU.”

This is one obstacle Britain and the EU will need to resolve to reach a transitional deal, which will give the two sides time to prepare for the far-reaching impact of the end of 46 years of union.

Philippe Lamberts, a European lawmaker who deals with Brexit, told Reuters on Thursday of the looming clash: “Citizens’ rights will be a negotiation point and we want to stand firm on this that new provisions only enter into force after the end of the transition period.”

Many Brexit backers are voicing concern that the referendum result may be betrayed with the plan to change little of the current relationship immediately after Britain formally leaves on March 29, 2019. But May dismissed some of those concerns.

“They did not vote for nothing to change when we come out of the EU,” she said. “What we’re doing now is doing the job that the British people asked the government to do which is to deliver on Brexit.”