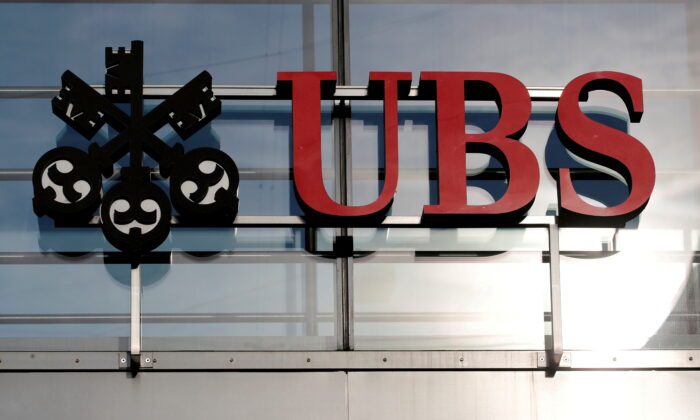 The logo of Swiss bank UBS is seen in Zurich, Switzerland, on Oct. 25, 2018. (Arnd Wiegmann/Reuters)
Markets

ZURICH—UBS posted its highest quarterly profit since 2015 on Tuesday, as robust trading activity by the world’s ultra-wealthy led to a 23 percent surge in fee income.

The surprisingly strong results follow double-digit percent gains for net profit in each of the past four quarters and come as Switzerland’s largest bank announced new plans for its digital push including a new advisory service for affluent U.S. clients.

Third-quarter net profit came in at $2.279 billion, easily surpassing a median estimate of a 24 percent slump to $1.596 billion from a poll of 23 analysts compiled by the bank.

“We continue to perform well above the financial targets that we have given you. And while we do that, we continue to be focused on driving growth on the top and the bottom line,” Chief Executive Ralph Hamers said on a call with analysts.

The bank’s flagship wealth management business posted its best pre-tax profit ever, soaring 43 percent on a 4 percent climb in income from transactions amongst its wealthy and ultra-wealthy clients as well as a 15 percent rise in net interest income due to higher lending levels and margins.

UBS’s investment bank posted a steadier performance, with revenue edging 1 percent higher. Revenue in its equities trading unit was up 3 percent to $1.36 billion, but its foreign exchange, rates, and credit arm posted a 32 percent drop in turnover to $363 million.

Revenue from advising on deals and listings jumped 22 percent to $792 million, helped by bumper M&A volumes.

The surprise profit comes on the heels of a stellar quarter for U.S. and British banks which, encouraged by economic rebounds, released cash set aside for pandemic losses. A record wave of dealmaking activity also bolstered results for the likes of Goldman Sachs and JPMorgan.

“The result marks another impressive quarter,” Citi analysts said in a note to clients, adding that UBS remained one of their top picks in the banking sector and reiterating a buy rating on the stock.

It nonetheless sounded a slightly cautious note for the coming quarter, saying continued uncertainty surrounding economic recovery and recent policy changes in China could hurt business. It also noted client activity levels had been unusually high in the past quarter.

CEO Hamers, who took the reins in November 2020 following a successful tenure at ING that made the Dutch lender more digitally savvy, said he planned to present an updated strategy on Feb. 1.

That will include new pushes into digital and hybrid banking.

UBS is trying to improve its digital services to reach more customers outside its super rich core client base, while also saving on costs. It sees potential for a new online platform to pull in $30 billion in the next year after being launched in May 2020, Reuters reported in June.

As part of its 2025 vision, it now wants to build a digitally scalable advice model for affluent clients in the Americas, which includes the core wealth market of the United States.

It also wants to expand its digital offerings in its home market, aiming to bring its cost/income ratio down to 55 percent in its Swiss business from 59 percent in the first nine months.

UBS derives the biggest chunk of its profits from advising and managing money for the world’s rich, while also maintaining smaller global investment banking and asset management operations. It conducts retail and corporate banking only in its home market.

That model has helped Switzerland’s largest lender exceed expectations since the outbreak of the coronavirus pandemic, as buoyant markets helped it generate higher earnings off of managing money for the rich.