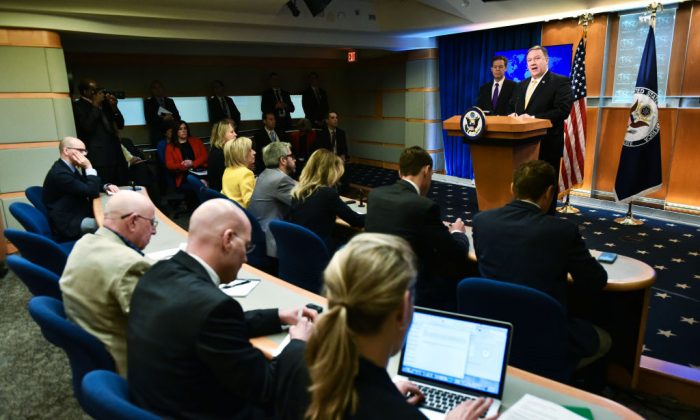 US Secretary of State Mike Pompeo speaks on the release of the 2017 Annual Report on International Religious Freedom on May 29, 2018, in the Press Briefing Room at the US Department of State in Washington, DC. (Mandel Ngan/AFP/Getty Images)
Chinese Regime

The U.S. State Department issued its annual International Religious Freedom Report for 2017 on May 29.

The report detailed the case of a man who was sexually assaulted and tortured in prison, eventually leading to his death—highlighting the severity of the Chinese regime’s ongoing persecution of religious dissidents.

Yang Yuyong, 56 and a resident of Tianjin, a major port city in northeastern China, was arrested in December 2016 by state security officials. After spending more than six months in police custody, he died on July 11, 2017. The report detailed the abuse he suffered prior to his death:

“He reportedly suffered severe abuse while in custody, including sexual abuse involving 13 inmates who pinched his genitals and bit his nipples. By the time authorities took him to receive medical care, he was already suffering complete organ failure. His family reported his body as being black and blue and having traces of bamboo sticks under his toenails.”

Yang was an adherent of a self-cultivation practice known as Falun Gong or Falun Dafa. According to the report, dozens of adherents of the practice died in detention in 2016.

By the late 1990s, Falun Gong was hugely popular—with official estimates of 70 and 100 million adherents.

The sheer size of the group and its moral teachings antithetical to the Chinese Communist Party (CCP) ideology invoked anxiety in then-Party leader Jiang Zemin—fearful that his grip on power would be challenged. As a result, Jiang ordered a nationwide persecution of the group on July 20, 1999.

Since then, hundreds and thousands have been detained inside China’s brainwashing centers, psychiatric wards, and prisons—with some paying the ultimate price, death.

According to Minghui.org, a website that tracks the persecution in China, Yang’s corpse was cremated against the wishes of his family during the early hours of July 12, 2017, when nearly a hundred police officers showed up at the Wuqing Hospital of Traditional Medicine where Yang passed away. They blocked anyone who tried to interfere.

The Chinese regime even turned average citizens against Falun Gong practitioners. According to the report, authorities offered monetary rewards to citizens who informed on these adherents.

Minghui.org also documented other instances of Falun Gong practitioners who died after being sexually and physically abused.

Qu Hui, a resident of Dalian City, in northern China’s Liaoning Province, was 45 years old when he died in February 2014, after his body failed to recover from the physical abuse he endured 13 years ago, which caused him to become paralyzed from the neck down.

In 2000, Qu was in Beijing to petition the central government about his rights to practice Falun Gong. Police arrested and detained him. Without a court trial, Qu was sentenced to a year of forced labor at a labor camp in Dalian.

He was sexually abused while there. Camp guards used electric batons to shock his male sexual organ and inserted batons into his anus. After enduring such physical beatings for about a year, Qu was released on bail in 2001. He became paralyzed and suffered ulcerations in his male sexual organ, incontinence, pulmonary failure, and kidney failure.