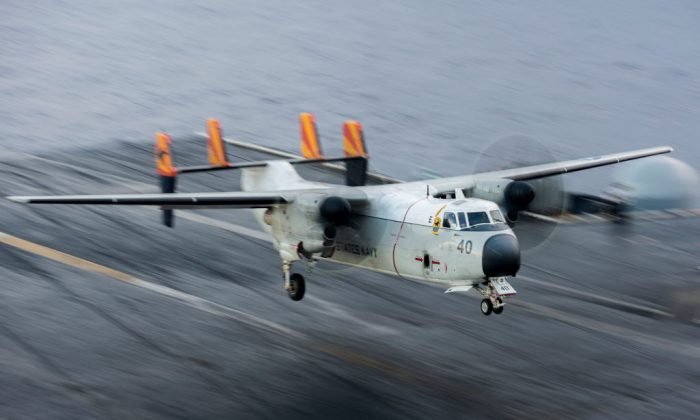 On Saturday, the U.S. Navy identified the three sailors that are still missing three days after a Navy plane crashed into the Philippine Sea just shortly after taking off from Japan.

According to Fox News, the Navy ended the search for the three men on Thursday, Nov. 23.

“Our thoughts and prayers are with the families of these sailors,” Vice Adm. Phil Sawyer, commander of U.S. Seventh Fleet said in a statement. “Their service and sacrifice will be lasting in Seventh Fleet and we will continue to stand the watch for them, as they did bravely for all of us.”

The sailors were on board a C-2A Greyhound when it crashed on Wednesday, Nov. 22. The USS Ronald Reagan (CVN 76) led a combined search and rescue campaign with units from the Japan Maritime Self-Defense Force (JMSDF), according to a Navy press release.

The C-2A Greyhound is a transport plane that can accommodate cargo, passengers, or both. It crashed while on route to the USS Ronald Reagan. At the time the aircraft was carrying 11 crew and passengers.

Later, eight sailors were rescued by the U.S. Navy Helicopter Sea Combat Squadron, according to the press release.

As of this writing, it is still not clear why the plane crashed.

Unnamed military sources told Fox News that Navy officials were currently investigating the causes of the crash. One probable cause, though extremely rare, would be that the aircraft suffered from dual engine failure.

The investigators are also checking the plane’s fuel and oil sources.

Combs was assigned to the “Providers” of Fleet Logistics Support Squadron (VRC) 30 and embarked aboard Ronald Reagan as part of Carrier Air Wing Five. He had won multiple awards including the National Defense Ribbon and the Navy Battle “E” Ribbon, according to the press release.

Both Chialastri and Grosso were assigned to the Ronald Reagan. They both had awards, which included the National Defense Ribbon.