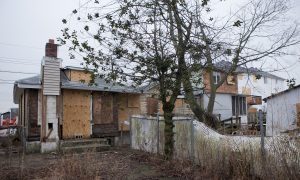 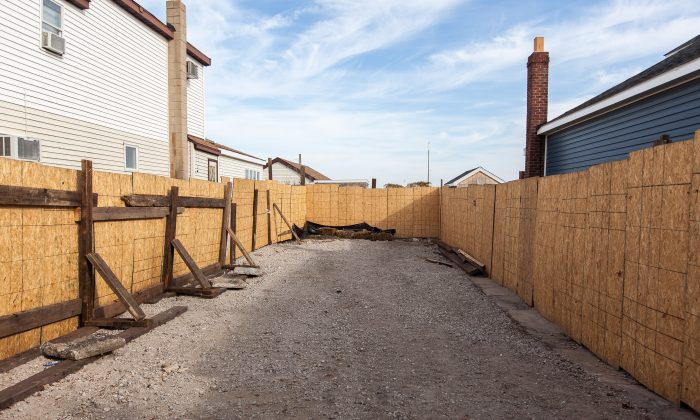 “When I took office, I found a stalled recovery program that, more than a year after the storm, had yet to begin construction on a single home,” he stated, referring to the city’s Build it Back program, which is funded with $1 billion from the federal government.

Ten months later, the city has started construction on 762 houses and over 1,000 homeowners have received reimbursement checks for repairs they did on their own.

And that’s not all. Two weeks ago the mayor announced a “Build it Back local hiring initiative” to give “Sandy-impacted New Yorkers priority for recovery and rebuilding jobs,” but where are the jobs?

Affected residents said they feel disconnected from all the fanfare. They are focused on results that can be seen on the ground, but there hasn’t been much to see.

“Build it Back did absolutely nothing,” said Rosanne Shevlin, standing in front of her house in Broad Channel, a scenic strip of land connecting Rockaway with the rest of Queens. Her house was inundated by 5 feet of storm surge water.

Shevlin applied to Build it Back right after the storm, but gave up three months later, seeing no progress. About every third applicant did the same. Shevlin still manages a Build it Back application for her father’s house one block away though, with no results so far.

De Blasio visited Broad Channel on Oct. 20. Standing in front of a half-finished house on the busy Cross Bay Boulevard, he announced “significant progress” on Build it Back. He pointed to Jayme and John Galimi, who are expected to move back into their house by the end of the year.

But that’s the only example in the area, locals confirmed. There’s another Build It Back construction site a few steps down the road, but so far it’s only an empty parcel with no signs of construction work as of Tuesday.

As for the jobs in the recovery promised to locals, there has been little progress. Federal regulations require at least 30 percent of hires go to local residents. The stipulation is that all contractors comply to “the greatest extent feasible.”

Broad Channel contractor John Tubridy, president of MXM Contractors Inc. said Tuesday he’s “heavily involved” with Build it Back. His company is working on 15 to 20 homes, has six full-time workers, hired dozens of part-timers, and 6 to 10 subcontractors. He expects to hire more, but he said the city hasn’t told him about any requirements to hire locals.

On Wednesday the city’s construction union, Local 79, was not aware that Build it Back had even started yet, let alone that it would bring jobs to its members, according to spokesman Richard Weiss.

And on Tuesday five workers at the Galimi family home all confirmed they were not from the neighborhood.

“People not from this area were cashing in,” said Kathleen Lawless, treasurer of the Broad Channel Civic Association. “Most of the people from down here had to fight the local contractors … to be able to work on their neighbors’ houses.”

Locals could use the jobs. The zip code covering Broad Channel and an adjacent part of Rockaway has an unemployment rate of over 13 percent, according to the 2012 American Community Survey. The unemployment rate for New York City is 6.9 percent.

A representative for the mayor’s office said as Build it Back work expands, new contractors will be required to employ a certain portion of workers from affected areas. At its peak, the program is expected to employ 7,000 people.

Many homeowners like Lawless were ineligible for Build it Back.

Some didn’t have enough damage done to their houses; some had too much flood insurance. In both cases people ended up with tens of thousands of dollars in uncovered damages. Even the reimbursement checks from Build it Back cover only 60 percent of the costs, and only expenses incurred within a year after the storm.

Most people couldn’t wait for the government. They pulled through by maxing out their credit cards, or got low-interest loans from the federal government.

The Queens neighborhood is scattered with abandoned houses, left behind by people who couldn’t afford both their mortgages and rents for temporary homes. There were also many foreclosures.

Lawless added that some people left out of fear of another storm. She and most of those she knows hope Sandy was a once-in-a-lifetime experience.

“Hopefully we will never see anything like that again,” she said.