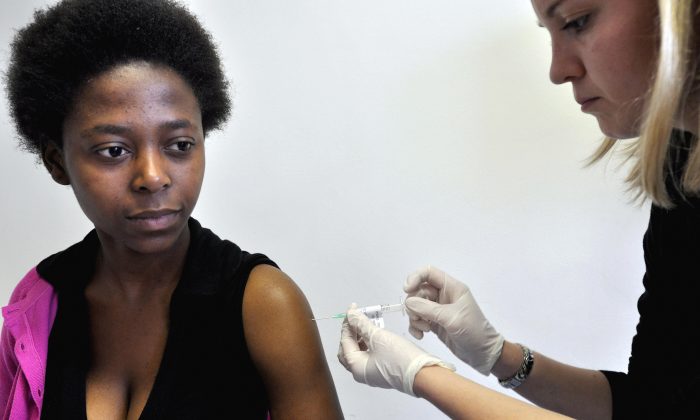 There is no doubt that the crisis caused by the HIV pandemic requires urgent and bold steps. While the roll-out of anti-retroviral therapy has had a significant impact on the epidemic, there are still 1.5 million deaths and 2 million new HIV infections globally every year. In South Africa alone, there are over 6 million people living with HIV. Only 42 percent of these people are being treated with anti-retrovirals.

In the long-term, the use of anti-retrovirals to control the HIV epidemic is unrealistic. Our best hope for an AIDS-free future is the development of a vaccine. Two major clinical trials are set to begin in South Africa in 2016. Both seek to test whether antibodies, which circulate in blood and are part of our natural defense to infection, can prevent new HIV infections.

The first trial, called HVTN 702, relies on the classical approach of active immunization. Here a vaccine designed to mimic an infection causes the body to make antibodies to HIV.

The second trial, called AMP or antibody-mediated protection, will run in parallel to the first trial. It will use manufactured antibodies that are infused into the body. This approach, called passive immunization, has been employed for over a 100 years to treat a variety of infectious diseases. This has only recently become an option for HIV. This trial is unprecedented in HIV prevention research.

We are at a pivotal stage in HIV vaccine development. Conducting two large scale efficacy trials in the region of the world with the highest HIV prevalence heralds a new more aggressive approach to tackle what is our most serious public health threat.

The HVTN 702 vaccine trial was inspired by the results of an earlier trial—RV144—conducted in Thailand. This trial showed a modest 31 percent efficacy and provided the first ever indication that a vaccine against HIV may be possible.

This vaccine is now being tested in southern Africa, but it has been tailored to match the viruses circulating in this region. There are also other modifications that are intended to improve on the efficacy of the vaccine which will hopefully facilitate its licensure.

The first, a cellular response, uses a harmless canarypox virus that has been engineered to carry small pieces of HIV. This tricks the body into thinking it is under attack so that it mounts an immune response to HIV.

For the other component—the antibody response—soluble protein derived from the outer envelope coat of the virus are recreated in the laboratory, and used to elicit antibodies to HIV. In RV144, individuals who developed antibodies to a small fragment of envelope called the variable region 1 and 2 (V1V2) had a reduced risk of HIV infection. As such, these immune responses are used to benchmark future trials.

Since the trial in South Africa is using a newly configured vaccine, it first needs to undergo safety and immunogenicity testing. As such, a small trial involving 252 healthy people at low risk of HIV infection is currently taking place.

If the results look promising then HVTN 702, the large efficacy trial that will be done in high-risk individuals, will proceed. For this, more than half the participants in the small safety trial must have V1V2 binding antibodies and HIV-specific helper cell responses.

The decision to go ahead with HVTN 702 will be made in the first quarter of 2016. If this happens, 5400 people will be enrolled at various clinical sites across South Africa. Half the participants in the trial will receive the vaccine, while the other half will receive a placebo, which contains no HIV components. Neither the participants nor the study coordinators will know who received the vaccine or placebo. This is known as a double-blinded randomized clinical trial, or RCT, and is the “gold standard” for assessing whether a product actually works.

The participants will be followed for up to three years for evidence of HIV infection. If there are significantly fewer infections in those who received the vaccine, it will be considered efficacious and may be licensed. If the vaccine is able to reduce the number of infection by at least 50 percent it will be considered suitable for general use. It will also be expected to have a major impact on the HIV epidemic.

While HVTN 702 takes place, the antibody-mediated protection (AMP) trial will be conducted concurrently in the region. This trial will test a related but different concept: whether a pre-formed antibody (called VRC01), which was cloned from an antibody-producing cell isolated from an HIV-infected individual, can prevent HIV infection after it has been transferred into the body.

To participate in this trial, 1500 healthy HIV negative women who are at high risk of HIV infection will receive intravenous infusions every two months for 20 months.

Unlike the binding antibodies which are induced by vaccination, VRC01 is a broadly neutralizing antibody. This antibody targets the part of the viral envelope that is needed to bind and infect human cells (similar to a lock and key). Since it targets an essential part of the viral life cycle, this antibody shows excellent coverage and is able to block infection of the majority of global viruses, including those circulating in South Africa. VRC01 has already been shown to be safe in humans and to prevent infection in monkeys.

Some Facts About HIV in the United States

Meet the HIV-Positive Kids Shunned From Their Communities in China

Charlie Sheen on HIV: ‘My partying days are behind me, my philanthropic days are ahead’

The purpose of this trial is to provide important proof-of-concept that broadly neutralizing antibodies can prevent HIV infection in humans. Although no vaccine has yet been able to stimulate these types of antibodies, many believe that a highly efficacious vaccine will depend on this.

In addition, this trial will provide an important benchmark for HIV vaccines by revealing the dose of antibody needed to protect an individual from HIV infection. If the trial is shown to work, it will open options to use antibodies as drugs to prevent HIV infection, which is similar to pre-exposure prophylaxis or PreP.

There is also the possibility in future of using more potent antibodies or combinations of antibodies or those engineered for improved efficacy and longevity. The use of gene therapy is also being explored. In this case antibody genes are inserted into a vector which then becomes a local antibody-producing factory inside the body.