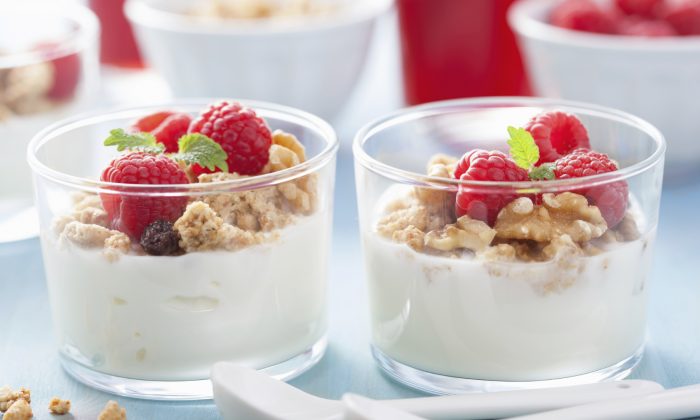 Study finds that men who eat yogurt regularly may have their risk of colorectal cancer reduced by more than a quarter. (OlgaMiltsova/iStock)
HK Life

After being diagnosed with rectal cancer in 2014, Taiwanese artist Yu Yuan-chi fought tenaciously against the disease for eight years. Unfortunately, she passed away on Aug. 21 at the age of 39.

To prevent colorectal cancer, apart from regular colonoscopy, having a good diet, plus regular exercise routines can also be counted as additional valuable health tips.

According to the 2019 cancer statistics recently released by the Hospital Authority (HA), colorectal cancer ranks second as the most common cancer case in Hong Kong, just after lung cancer. In 2019, 4,033 people died of it.

In general medical terms, malignant tumours that occur in either the colon or rectum are both called colorectal cancer. In general, colorectal cancer develops from polyps, and adenomas in the large intestine are the most likely type of polyps to develop into cancer.

According to results by a research team from the University of Washington in the United States, published in the Journal of Gut at the end of June 2019, men who take two or more servings of yogurt in a week can reduce the risk of colorectal adenomas by 26 percent. These adenomas, normally in form of raised tissues found in the colorectal mucosa, can easily become cancerous if left untreated.

Some scientists believe the reduction in risk may be due to the acceleration effect of yogurt on the growth of healthy bacteria in the gut. But what remains unknown is, through what mechanism this is done. On the other hand, researchers did not find a similar effect of taking yogurt on reducing women’s risk of developing polyps.

Chao Ming-wei, a toxicologist, recently mentioned it and posted it on Facebook, with reference to the above research report. He said that the gastrointestinal tract is the part of the human body most notorious to accumulate dirt, and the probiotics in yogurt can help excrete the dirt and reduce carcinogens in it. In addition, yogurt is also well known for its effect on regulating immunity.

However, Chao also reminds his followers that commercially available yogurts usually contain a lot of added sugar, and yogurt itself has a certain amount of natural fat, so it is not suitable for people practicing weight loss, nor for diabetics.

Wang Chaoyang, gastroenterologist and clinical assistant professor at Cornell University School of Medicine, said in the Epoch Times programme Health1plus1 that although the incidence of colorectal cancer is high, regular colonoscopy after middle age can help detect and cure it at an earlier stage.

Wang pointed out that it is necessary to pay attention to whether there are unhealthy habits in life that might increase the risk of developing polyps and colorectal cancer. As such he includes lack of exercise, frequent consumption of red meat and processed meat products, excessive obesity, smoking, drinking, and the like.

Apart from having healthy habits, he also suggested the following ways to reduce the risk of colorectal cancer: such as increased folic acid and minerals intakes of selenium and calcium; eating more high-fiber foods such as fruits and vegetables; women taking hormones after menopause, and the like.