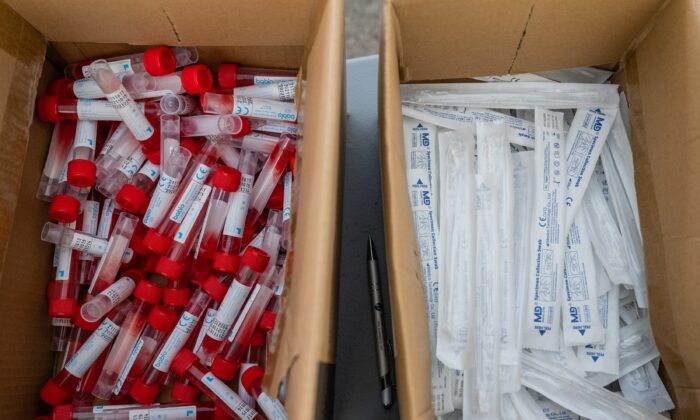 Two COVID-19 treatments that have not yet been authorized for administration were successful in clinical trials, the companies behind the drugs announced on April 11.

A pill developed to attack cancer was successful in curbing deaths among COVID-19 patients in hospitals deemed high risk for Acute Respiratory Distress Syndrome, according to U.S.-based Veru Inc., the maker of the drug.

The interim results from a phase three double-blind, randomized, placebo-controlled trial, conducted in the United States and five other countries, showed a 55 percent relative reduction in deaths, the company said.

Of the 52 patients in the placebo group, 45 percent died. Of the group treated with the pill, known as sabizabulin, 20 percent died.

The average age of the patients was in the low 60s, and patients in both groups had the Omicron virus variant, though some were sickened with Delta.

“This really represents a big step forward,” Dr. Mitchelle Steiner, Veru’s CEO, told a conference call discussing the results. Sabizabulin “is highly effective, and appears to be more effective than what’s out there today,” he added.

Most recently cleared COVID-19 treatments are aimed at non-hospitalized people who are at risk of becoming hospitalized.

The treatments that have been cleared by the Food and Drug Administration (FDA) for hospitalized patients, such as remdesivir, have shown mixed success in trials and real-world data.

Patients in both arms of Veru’s trial were also able to receive standard of care, which includes remdesivir, from Gilead Sciences, and the steroid dexamethasone.

Veru is in talks with the FDA about emergency use authorization.

Veru officials said the drug was also well-tolerated, with no significant side effects.

The results of the trial have not been published as a preprint paper or peer-reviewed.

Also this week, Israel-based RedHill Biopharma said in vitro testing of its experimental COVID-19 pill showed efficacy against Omicron, which became the dominant SARS-CoV-2 variant in many countries in late 2021.

A previous phase two/phase three study of the pill, opaganib, showed it reduced mortality, according to RedHill.

The company says it is in talks with regulators in the United States, Europe, and additional countries.