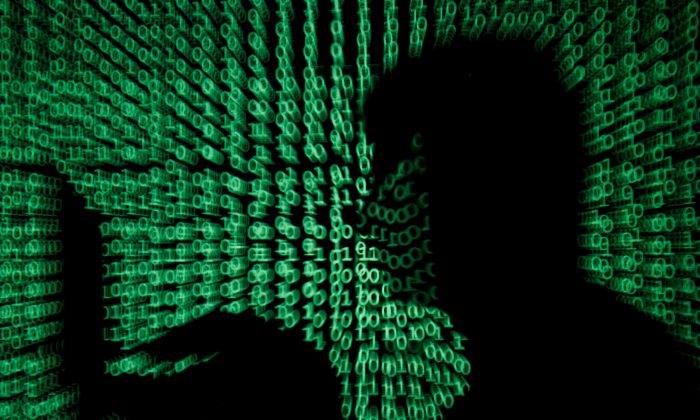 A man holds a laptop computer as cyber code is projected on him in this illustration picture taken on May 13, 2017. (Reuters/Kacper Pempel/File Photo)
UK

LONDON—Customers who use social media to vent frustration at their banks when services go down are inadvertently making themselves targets for fraudsters, law enforcement officials and industry insiders said.

That was the case for customers of Britain’s TSB, many of whom took to social media to complain after a computer systems migration by the bank left thousands of users locked out of their accounts.

The bank’s chief executive on Wednesday said TSB saw the daily rate of attempted fraud on its customers spike by up to seventy times following the outage and that around 1,300 customers had money taken from their accounts.

A person familiar with TSB’s investigations into recent frauds said while it can be difficult for the bank to know for certain how criminals obtain information about an account, activity on social media is a concern. When accounts are compromised, it’s usually because a customer gives up their details and “a lot of that is entirely voluntary through social media”, the person said.

TSB spokeswoman Supreet Thomas said the bank encourages customers to be careful about how much personal information they share online. “The more information made available on these sites, the easier it becomes for fraudsters to steal your identity,” she said.

Security specialists say news events like the TSB outage are the perfect hook for scammers, largely because people using social media may identify themselves as a customer of a given firm making it easier for them to defraud.

“Consumers—or people—are always going to be the weakest link, so if they can find ways to attack the customer… then they will go after that,” said Mark Nicholls, director of cyber security at UK-based firm Redscan.

TSB’s botched computer-systems migration have cost around £70 million ($93.95 million) so far, its Spanish parent Sabadell said on Thursday. The issue has also prompted a regulatory investigation and criticism of its chief executive. A panel of British lawmakers said Thursday they had lost confidence in TSB’s CEO, Paul Pester.

The bank’s chairman responded that Pester retains the full support of the board.

Following TSB’s outage issues, opportunistic fraudsters used fake text messages and emails claiming to be from the bank. TSB customers reported 749 phishing attempts in May after the bank’s IT troubles became widely known, up from just 30 the previous month, according to Action Fraud, the UK’s national cyber crime reporting center.

Action Fraud, which refers reports of fraud from banks to the appropriate local police force, said they continued to handle the TSB cases.

Some of the attempts were unsubtle.

“We have detected suspicious activity on your current account so we need you to verify some details, please use the like below,” ran one phishing attempt texted to a TSB customer and posted to Twitter on Wednesday.

The recipient said they realized the misspelled attempt wasn’t legitimate.

In such situations, he said fraudsters send out mass texts or emails with the hopes of hitting a customer of the affected organization, who they believe will be more receptive to the scam.

Some scammers also used tools to make their calls and messages appear as though they came from numbers genuinely used by TSB, he noted.

Even so, Nicholls said some may have used more targeted approaches and that he would advise consumers against tweeting about their banking experiences.

“Anything that can link you to a current ongoing campaign may cause you to become a target unfortunately,” he said.

By Lawrence White and Emma Rumney