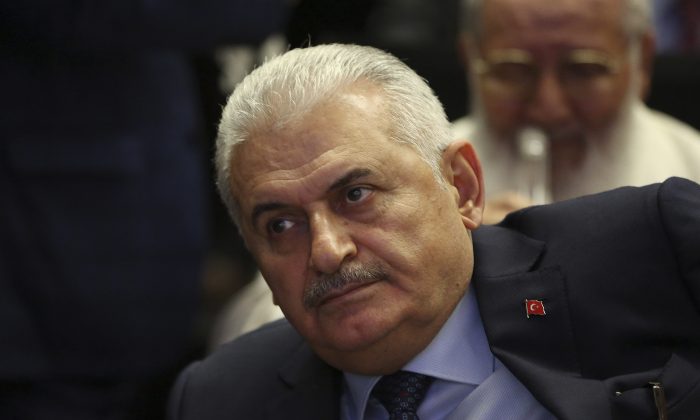 In this Thursday, May 12, 2016 photo, Binali Yildirim, Turkey's Transportation Minister and founding member of Turkey’s governing AKP party, participates in a meeting in Ankara, Turkey. It is announced Thursday May 19, 2016, Yildirim will stand unopposed for the party leadership and thereby automatically become Prime Minister at an extraordinary meeting to be held Sunday in Ankara. The shake up comes after Prime Minister Ahmet Davutoglu stepped down on May 4.(AP Photo/Burhan Ozbilici)
Europe

ISTANBUL— Turkey’s governing party on Thursday formally tapped Binali Yildirim as its candidate to lead the party and become the country’s next premier.

The spokesman of the ruling Justice and Development Party, Omer Celik, made the announcement, saying the lawmaker from Izmir was chosen “with great consensus.”

Yildirim is Turkey’s minister of transport, maritime and communications as well as a founding member of the AKP. He will run unopposed for the party leadership at a special convention Sunday in Ankara. Traditionally, the post of premier in Turkey goes to the leader of the largest party in parliament.

The shake-up comes after Prime Minister Ahmet Davutoglu announced May 4 he was stepping down amid differences with President Recep Tayyip Erdogan. Analysts expect his successor to be more in tune with Erdogan, who is pushing for a constitutional overhaul that would concentrate greater powers in his hands.

Supporters credit Yildirim for his role in developing the president’s signature infrastructure projects, which have helped buoy Turkey’s economy and boost the party’s popularity. But critics, including the leader of the main opposition party, have accused him of graft in 2014. Yildirim has rejected that accusation.

The change in party leadership comes at a time when Turkey, a member of the NATO alliance, is facing multiple security threats including renewed conflict with Kurdish rebels in the southeast, a wave of suicide bombings linked to Kurdish and Islamic State militants, as well as growing blowback from the war in neighboring Syria.

“I will take this terror trouble off Turkey’s agenda,” vowed Yildirim addressing his party. He also thanked Davutoglu for his services.

The transition also coincides with growing tensions with the European Union over a controversial deal to reduce the flow of illegal migrants from Turkey to Greece, which Davutoglu helped broker.

Davutoglu, once a close ally of Erdogan, fell out with the president over an array of issues including the possibility of peace talks with Kurdish rebels, the pre-trial detention of journalists accused of spying and academics accused of supporting terrorism.

Turkey’s president is advocating for a broader definition of terrorism, one that alarms rights groups who say existing laws are already used to crush dissent. That stance is also at odds with EU conditions for Turkish citizens to benefit from visa-free travel.

Crucially, Erdogan wants to turn the presidency, in theory a ceremonial role, into an all-powerful position by changing the constitution. Many believe Yildirim, a technocrat, will have even less influence than his predecessor and only enjoy a short-lived mandate.

“We all know that the president wants to change the constitution and make Turkey have a transition to the so-called presidential system,” Turkish political analyst and journalist Mustafa Akyol said. The AKP has become “totally marked by the president and the prime ministry lost its importance.”