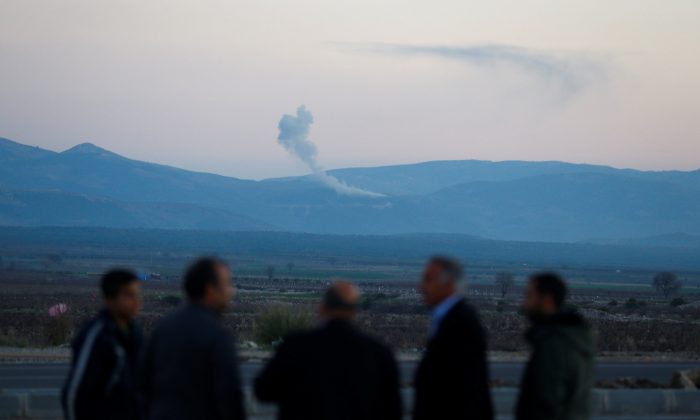 Smoke rises from the Syria's Afrin region, as it is pictured from near the Turkish town of Hassa, on the Turkish-Syrian border in Hatay province, Turkey January 20, 2018. (Reuters/Osman Orsal)
Middle East

AZAZ, Syria—Turkish ground forces pushed into northern Syria’s Afrin province on Sunday, the army said, after Turkey launched artillery and air strikes on a U.S.-backed Kurdish militia it aims to sweep from its border.

The Syrian-Kurdish YPG militia, supported by the United States but seen as a terrorist organization by Turkey, said it had repulsed the Turkish forces and their allies after fierce clashes.

It marked the second day of fighting after Ankara opened a new front in the nearly seven-year-old Syrian war. Under what the Turkish government has called “Operation Olive Branch”, Turkish air strikes on Saturday pounded YPG positions in Afrin.

Turkey is targeting the U.S.-backed fighters at a time when ties with ally Washington appear close to breaking point.

Turkey sees the YPG as an extension of the outlawed Kurdistan Workers Party (PKK) which has carried out a deadly, three-decade insurgency in Turkey’s mainly Kurdish southeast. The United States is backing the YPG in Syria, seeing it as an effective partner in the fight against the terrorist group ISIS.

“The Olive Branch Operation is going on as planned, and the ground operation has started,” the Turkish army, NATO’s second-largest, said. Prime Minister Binali Yildirim said the operation would create a 30-km (19-mile) “safe zone”, according to broadcaster HaberTurk.

Turkey-backed Free Syrian Army rebel factions had captured a Kurdish village with no resistance and were clearing landmines, a Turkish official said.

The YPG said it had repulsed the Turkish forces.

“All the Turkish military’s ground attacks against Afrin have been repelled so far and they have been forced to retreat,” Nouri Mahmoudi, a YPG official, said. Since the morning, the combatants have exchanged shelling and clashed along several frontlines around Afrin, he said.

The Turkish military said it had hit 153 targets so far, including shelters and hideouts used by Kurdish militants. The YPG has said Turkey’s strikes killed six civilians and three of its fighters and wounded 13 civilians.

The YPG has also accused Turkey of striking civilian districts and a camp for the displaced in Afrin.

Intense Turkish artillery fire and strikes continued to hit some villages, the YPG said. Fierce battles raged to the north and west of Afrin against Turkish forces and their Syrian rebel allies, said Birusk Hasaka, the YPG spokesman in Afrin.

A Reuters reporter on the outskirts of the northern Syrian town of Azaz, under the control of rebels from the Free Syrian Army factions, heard several blasts and saw smoke rising from a hill to the west, where a fighter said the YPG were.

There were no signs of conflict in the town itself, where life appeared to continue as normal with traffic on the muddy, potholed roads and uniformed rebel police at the main roundabouts. Still, Azaz was bleak and the toll from the war was plainly seen in some of its crumbling buildings.

At one of the car repair workshops on the outskirts of the town some men were fixing a gun-loaded vehicle.

“In its second day, #OliveBranchOperation continues to ensure peace and security for our people, protect Syria’s territorial integrity and eliminate all terrorist elements in the region,” Turkish President Tayyip Erdogan’s spokesman Ibrahim Kalin said on Twitter.

“Turkey expects its allies to support its fight against terrorism in all of its forms,” he added, in comments that appeared aimed at Washington.

On Saturday, a Pentagon official said: “We encourage all parties to avoid escalation and to focus on the most important task of defeating ISIS.”