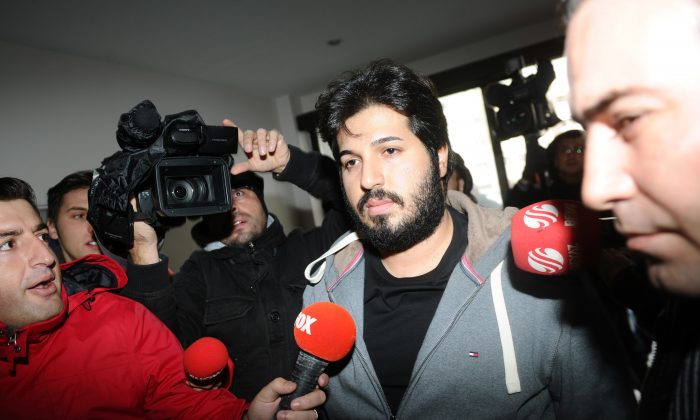 Detained Azerbaijani businessman Reza Zarrab (C) is surrounded by journalists as he arrives at a police center in Istanbul on Dec. 17, 2013. (OZAN KOSE/AFP/Getty Images)
International

Turkish Bank Executive Charged in Iran Sanctions Case in US

NEW YORK—U.S. authorities have arrested an executive of a Turkish state-owned bank accused of conspiring with prominent Turkish gold trader Reza Zarrab and others to violate U.S. sanctions on Iran.

The arrest of Mehmet Hakan Atilla, a deputy general manager of Halkbank, expands a case that has drawn criticism from Turkish President Tayyip Erdogan, who said he believed U.S. authorities had “ulterior motives” in prosecuting Zarrab.

Atilla’s arrest was made public one day after it was revealed that Zarrab had added Rudolph Giuliani, the former New York City mayor and a confidante of President Donald Trump, to his legal team.

Turkey’s relations with the United States had deteriorated under former President Barack Obama, and officials in Ankara had been hoping for improvement under Trump.

It is unclear whether Atilla has hired a lawyer for his defense. Turkish officials contacted by Reuters said they had no information on the arrest.

According to a criminal complaint made public on Tuesday, Atilla worked with Zarrab and others from 2010 to 2015 to conceal Zarrab’s ability to supply currency and gold to Iran’s government and various entities in that country through a Turkish bank, without subjecting the bank to U.S. sanctions.

As part of that scheme, Atilla and Zarrab tricked numerous U.S. banks to process illegal transactions, through the use of front companies and false invoices, the complaint said.

The transactions were disguised to appear as though they involved food, and thus subject to humanitarian exceptions to the sanctions, the complaint said.

“United States sanctions are not mere requests or suggestions; they are the law,” Acting U.S. Attorney Joon Kim in Manhattan said in a statement.

Attila, 47, was arrested on Monday and expected to appear on Tuesday in Manhattan federal court, Kim’s office said.

Zarrab, a dual national of Iran and Turkey, had been previously arrested in 2013 in a corruption probe into people with close ties to Erdogan, who was then Turkey’s prime minister.

In questioning that case, Erdogan said in September that prosecutors were trying to implicate him by referring in the indictment to Zarrab’s donations to an educational charity with which Erdogan and his wife were affiliated.

Ties between the United States and Turkey have been strained by U.S. support for Kurdish militia fighters in Syria, and the presence in the United States of Turkish cleric Fethullah Gulen, whom Ankara blames for July’s failed military coup.

U.S. Secretary of State Rex Tillerson is scheduled to make a one-day visit to Ankara this week, where talks with Erdogan will focus on Syria, senior U.S. officials said on Monday.

Meanwhile, in a court filing on Monday, Kim questioned whether Zarrab’s legal team could include Giuliani and former U.S. Attorney General Michael Mukasey, who work for law firms that also represent some of the alleged U.S. bank victims.

Another lawyer for Zarrab said Giuliani’s and Mukasey’s roles would not require them to appear in court.

Kim later said his understanding was that both will remain “involved in efforts to explore a potential disposition of the criminal charges in this matter.”