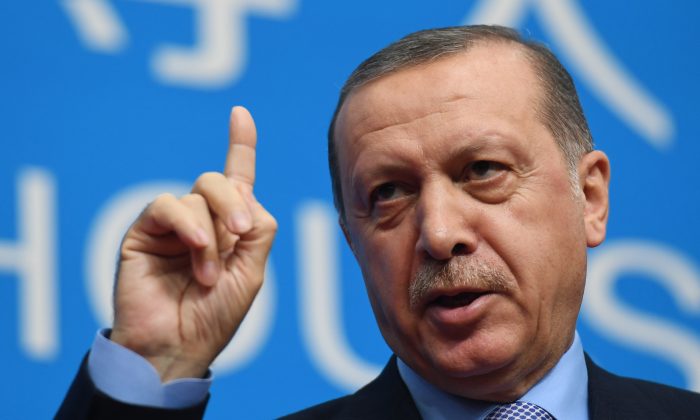 Turkey's President Recep Tayyip Erdogan at a press conference after the closing of the G20 Leaders Summit in Hangzhou on Sept. 5, 2016. (Greg Baker/AFP/Getty Images)
Middle East

ISTANBUL—Clashes erupted between police and protesters Sunday after Ankara announced it had replaced 28 elected municipal and district mayors in several predominantly Kurdish towns in Turkey’s east and southeast.

The officials being replaced are suspected of colluding with groups the government considers terrorist organizations, the Interior Ministry announced Sunday, adding that the decision was in line with the governmental decree enacted on Sept. 1.

Turkey declared a state of emergency following a failed military coup on July 15 that allows the government to rule by decree. It has since suspended tens of thousands of people from government jobs over suspected links to terrorist organizations.

Of those replaced, 24 are suspected of ties with the Kurdistan Workers’ Party or PKK, and four are thought to be linked to the Gulen movement allegedly responsible for the abortive coup which killed over 270 people.

The ministry said in its statement that when local governments “come under the influence of terrorist organizations, it is the state’s primary duty to take precautions against those who have usurped the people’s will.”

Justice Minister Bekir Bozdag wrote on Twitter, “Mayors and town councilors, who come to power through elections, must perform their duties according to the law. Being an elected official isn’t a license to commit crimes. If mayors and town councilors finance terrorism by transferring public funds allocated to them to serve the people and allow the use of municipal vehicles, equipment and capabilities in terrorist activities, they lose their democratic legitimacy.”

Three of the 28 officials belong to the ruling Justice and Development Party, one to the Nationalist Movement Party and the rest to the pro-Kurdish People’s Democracy Party, or HDP.

The HDP condemned the appointments as a “coup by trustees” in a press statement released Sunday. It said wouldn’t recognize the appointments which were violating the Turkish constitution and the European Convention of Human Rights.

“This unlawful and arbitrary action will only deepen existing problems in Kurdish towns and cause the Kurdish issue to be even more unsolvable,” it added.

Addressing the nation on Sunday for the Muslim holiday Eid, President Recep Tayyip Erdogan said he was determined to “save Turkey from the PKK scourge.”

“Like the Gulen movement, the PKK cannot possibly withstand the power of the people and the strength of the state,” he said in a video statement.

The mayors have been replaced by Ankara-appointed deputy and district governors, who took up their new posts Sunday morning. Security forces have taken up positions outside the affected municipal offices.

Private Dogan news agency reported that a group of about 200 people gathered in front of city hall in the southeastern town of Suruc to protest the appointments and were dispersed with tear gas and water cannons.

Four people, including a deputy mayor, were briefly detained in a minor skirmish outside city hall in the southeastern province of Hakkari. Co-mayor Fatma Yildiz, who was replaced Sunday morning, said the decision was “a blow against the will of the people,” Dogan reported.

Turkish media reported internet and electricity were out in the affected cities in the morning, but no official reason has been given.