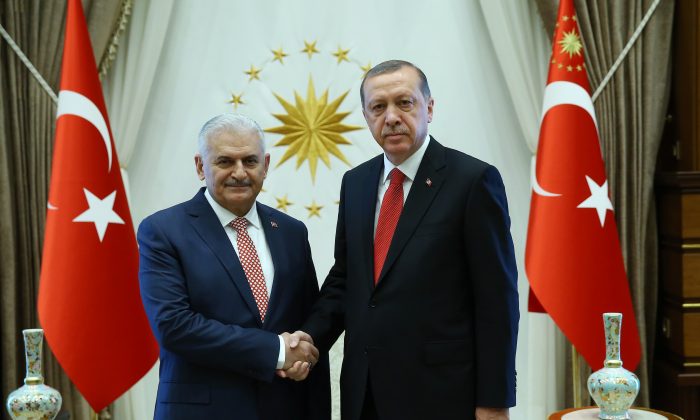 Turkish President Recep Tayyip Erdogan (R) with Binali Yildirim, the ruling party's new chairman and new prime minister, prior to their talks at the Presidential Palace in Ankara, Turkey, on May 24, 2016. (Presidential Press Service via AP)
Opinion

Turkey No Longer a Democratic Model for the Middle East

EAST LANSING—The Turkish political system, touted only a few years ago as a model for other Muslim countries in the Middle East to emulate, lies in tatters.

The parliament’s May 20 decision to approve an amendment to the Constitution to strip a select group of MPs, many from the predominantly Kurdish HDP, of immunity from prosecution may be the last nail in the coffin of the Turkish democratic experiment.

This amendment sponsored by the ruling AKP was passed with the help of ultra-nationalist MHP members viscerally opposed to any concession to Kurdish demands.

Political turmoil in Turkey has not only complicated its relations with the European Union and regional neighbors but ended hope that a secular, democratic Turkey could be a model for the Muslim world.

Political turmoil in Turkey has not only complicated its relations with the European Union and regional neighbors but ended hope that a secular, democratic Turkey could be a model for the Muslim world.

The amendment’s principle aim is to disqualify HDP parliamentarians from membership. Authorities have already filed cases, accusing MPs of aiding and abetting the outlawed PKK with statements espousing the Kurdish cause for fair treatment or autonomy.

Removing most of the 59 HDP members from parliament and outlawing the party present immediate political benefits for the ruling AKP. The party could claim a two-thirds majority in parliament sufficient to amend the Constitution, changing the parliamentary system into a presidential one and concentrating near total power in the hands of President Recep Erdogan.

HDP’s success in the two elections held last year, crossing the 10 percent vote barrier and securing representation in parliament, thwarted a two-thirds majority for AKP and changes to the Constitution advocated by Erdogan.

Lifting parliamentary immunity for the HDP MPs is bound to have domestic and international repercussions.

“As the country slides backwards, what we have in our hands is not a democracy, but a crude form of majoritarianism. The central components of democracy—such as separation of powers, rule of law, freedom of speech—are all but broken.”

Central components of democracy such as separation of powers may be broken, suggests Elif Shafak.

Though handpicked by Erdogan to become prime minister in September 2014, Davutoglu is politically more liberal than Erdogan. An erudite professor of politics, he was conscious of the damage to Turkey’s political fabric by Erdogan’s authoritarian tendencies.

Although Davutoglu never criticized Erdogan in public, it’s reported that in private he tried to put the brakes on the president’s agenda. In particular, he was opposed to using antiterror laws to prosecute academics and journalists critical of the president and was not enthusiastic about transforming the country into a presidential system.

Davutoglu also presented a conciliatory face toward the Kurds even after Erdogan had declared all-out war not only against the PKK but against the moderate and constitutionalist HDP as well.

The resignation has removed, for the moment, the only internal constraint within the AKP on the implementation of Erdogan’s authoritarian agenda.

Former President Abdullah Gul and former Deputy Prime Minister Bulent Arinc, co-founders of the AKP with Erdogan, have distanced themselves from the president’s views and been critical of attempts to change the country’s political system.

Arinc, openly critical of Erdogan’s moves of late, declared that “if the people with whom we fought together then [against the ban on the headscarf] have now changed their side, if they have become the ban-imposers due to intoxication with power, then we will see this attack on freedom as the basis for a struggle for freedom.”

Davutoglu’s resignation and Arinc’s criticism may denote that Erdogan has over-reached, and a backlash from within the AKP may be in the making.

Erdogan’s attempt to implement his agenda has also done irreparable damage to Turkey’s standing abroad and relations with international and regional actors—challenging the view Turkey is a model to be emulated in the Arab world.

Main positive features of the Turkish model included reconciling democracy with Islamic values while demonstrating that a secular state could co-exist with a largely religious society and that nationalist pride is not irreconcilable with the rights of ethnic and religious minorities like the Kurds and the Alevis.

Both the Turks and many in the West hyped the Turkish model in the wake of the short-lived Arab Spring as a solution to the region’s intractable problems, above all, the inability to shake off an authoritarian past.

Erdogan’s policies, including reversing positive trends in the Kurds’ relationship with the Turkish state, have led to a severe beating for Turkey’s image in the region.

Ironically, Erdogan himself was the author of the state’s reconciliatory approach on the Kurdish issue. On his orders negotiations had been undertaken with the PKK leading to a ceasefire and withdrawal of PKK fighters from Turkey to the mountains of Iraq.

Later, the Kurds voted in large numbers for the HDP, helping the party cross the 10 percent barrier, costing the AKP a two-thirds majority in the June 2015 parliamentary election.

In return, Erdogan cracked down on opponents in southeastern Turkey, the Kurdish heartland, for thwarting his ambition of becoming Turkey’s executive president.

Erdogan fought a two-pronged war—a military one against the PKK in southeastern Turkey and the Kandil Mountains of Iraq, and a political vendetta against the HDP. The AKP government blurred the lines between the two with the aim of eventually outlawing the HDP.

This strategy, leading to the Kurds increasingly taking up arms and engaging in terrorist attacks in Ankara, Istanbul, and elsewhere, has played into the visceral fear among many Turks that the Kurds are but instruments of external powers interested in dismembering Turkey. The gulf between Kurds and Turks has widened.

The emergence of the Kurdish PYD as a major participant in the ongoing civil war in Syria and reported links with the PKK played into Erdogan’s hands as well by increasing Turks’ insecurity.

The Turkish military strategy in Syria, while ostensibly aimed at bringing down the Assad regime and inflicting damage on the Islamic State, has in fact been more concerned with neutralizing the PYD and preventing the emergence of a putative Kurdish state in Syria along the lines of the Kurdish Regional Government (KRG) in northern Iraq.

Turkey’s attacks on PYD positions in Syria disrupt the war against the Islamic State and irritate the West.

So far Ankara’s policy towards the Kurds in Turkey and Syria has not directly affected its good relations with the KRG, but that may not last long as ethnic affinities begin to overcome economic considerations in northern Iraq.

Turkey’s attacks on PYD positions in Syria also disrupt the war against ISIS—irritating Turkey’s Western allies, including the United States which considers PYD an ally in that fight.

The latest illiberal moves on the part of the Turkish government increased tensions between Turkey and the European Union, putting ongoing negotiations on granting Turkish nationals visa-free entry into the Schengen area into jeopardy.

The visa deal was in danger of falling apart by Turkey’s refusal to change its anti-terror laws, which the E.U. feared were being used against journalists and government critics.

The constitutional amendment may have sealed the fate of those negotiations and could derail the refugee pact, by which the E.U. had agreed to compensate Turkey with $3 billion in return for containing the flow of Syrian refugees into Europe.

The constitutional amendment lifting the immunity from prosecution of Turkish MPs is bound to erode the residual democratic nature of the Turkish system with negative implications for Turkey’s image, its domestic and regional security environment, and relations with major allies.

As this case demonstrates, one man’s ambitions can derail the political process and change a country’s security environment. Personalities and personal ambition still count in politics.

Mohammed Ayoob is university distinguished professor emeritus of international relations at Michigan State University. He is the author of “Will the Middle East Implode?” (2014) and “The Many Faces of Political Islam” (2008). Copyright © 2016 YaleGlobal and the MacMillan Center. This article was originally published on YaleGlobal Online.