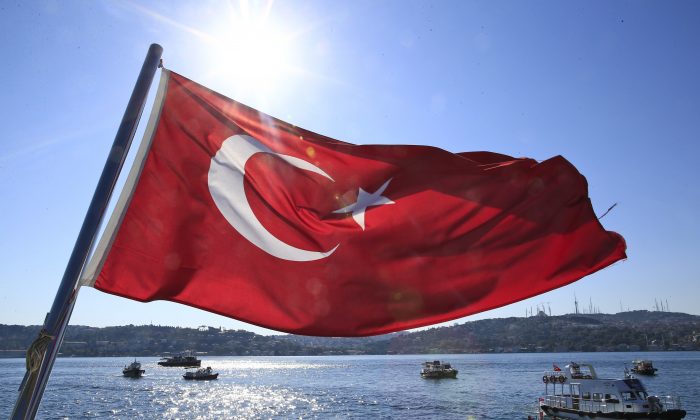 A Turkish flag flies near the Bosporus strait prior to the Bosporus Cross-Continental Swimming Race in Istanbul, Turkey, on July 24, 2016. (Lefteris Pitarakis/AP Photo)
Europe

ANKARA, Turkey—The president of Turkey and the prime minister of Greece agreed Feb. 5 on the need to keep “channels of dialogue” open between their countries, which have come to the brink of war three times since the early 1970s and remain divided over an array of issues.

Greek Prime Minister Alexis Tsipras and Turkish President Recep Tayyip Erdogan made the conciliatory comments while Tsipras was in Ankara. His two-day visit got off to a shaky start when Turkey put up bounties for the capture of eight servicemen who fled to Greece following a failed 2016 coup.

But unlike Erdogan’s 2017 trip to Athens—when both sides publicly aired grievances—the two leaders on Feb. 5 focused on dialogue and building economic ties.

“If I had not been able to pick up the phone, and the president had not picked up the phone to get in touch, we would have very likely found ourselves often … faced with a dangerous escalation,” Tsipras said. “So I’m glad that there is this level of communication and sincerity between us.”

Tsipras added during a joint news conference with the Turkish president the neighboring NATO allies had agreed to take steps to try and ease tensions from decades-old territorial disputes in the Aegean Sea. He did not elaborate.

Regarding the Mediterranean island nation of Cyprus, which has been ethnically split into Greek and Turkish sides since the 1970s, the prime minister called for a “fair and lasting” settlement.

Tensions have flared over gas exploration off Cyprus. Turkey insists that gas exploration by Cyprus breaches its rights and those of Turkish Cypriots to potential hydrocarbon deposits.

“I believe that we, as Turkey, can peacefully solve all issues with Greece on the basis of fairness,” Erdogan said.

However, Erdogan stressed that Turkey expects more cooperation from Greece in returning criminal suspects, saying the country should not become a safe-haven for coup-plotters.

“Of course, coup-plotters are not welcome in Greece,” Tsipras responded, adding that his government had to respect the decisions of Greek courts that ruled against extraditing the Turkish servicemen.

Before Tsipras set foot in Turkey, state-run Anadolu Agency reported the Turkish Interior Ministry had added 74 officers to the list of people wanted for alleged roles in the coup attempt.

The list includes the eight servicemen who escaped to Greece in a military helicopter soon after the July 2016 coup attempt. They have denied involvement.

Turkey is offering 4 million Turkish lira (some $770,000) for the capture of each of the eight servicemen, the news agency reported.

In Greece, Giorgos Koumoutsakos, an opposition lawmaker with the New Democracy party who is responsible for foreign affairs, accused Turkey of “a new provocative move” to undermine Tsipras’ visit.

“It has placed a bounty on the eight Turkish servicemen, disregarding the final decisions of the independent Greek justice system which has granted them asylum,” he said.

On Feb. 6, Tsipras is scheduled to visit an Orthodox theological seminary on an island off Istanbul, becoming the first serving Greek prime minister to do so.