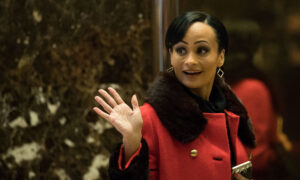 The image, composed of four different images, shows a bright, smiling Trump moving over a black and white photo of Obama looking down. The text on the image reads “The Best Eclipse Ever!”, in reference to the total solar eclipse a few days earlier on Aug. 21.

After taking an initially consolatory approach to then Democratic opponent Hillary Clinton, as well as Obama, Trump has made more forceful statements against them in recent months.

Both Clinton and Obama have remained active in politics and in opposing Trump. In May, Clinton announced her intent to form a new political action group as “part of the resistance” to Trump’s presidency. Federal Election Commission filings show that Clinton has so far donated $800,000 to the group.

Obama has taken a number of jabs at Trump, most notably on health care and climate change, breaking a longstanding tradition among former presidents of not criticizing current administrations.

Trump, in turn, has criticized Obama on several occasions since taking office, most recently at a rally in Phoenix, Arizona.

Speaking at the rally on Aug. 22, Trump called out the state of race relations during Obama’s time as president.

“They asked me, ‘What about race relations in the United States?’ Now I have to say, they were pretty bad under Barack Obama, that I can tell you,” Trump said at the rally.

In his speech, Trump pointed to the fact that an increase in jobs and wages could have a “very big and positive impact” on race relations.

“I believe wages will start to go up, and I think that will have a tremendously positive impact on race relations,” he said.

In his speech , Trump also criticized Democrats in Congress, who he described as obstructing his agenda.

Trump also criticized the Democratic Party for its lack of vision for America.

“So the Democrats have no ideas, no policy, no vision for the country other than total socialism and maybe, frankly, a step beyond socialism from what I’m seeing,” he said.

Since coming into office, the Trump administration has experienced a number of delays in Congress for its appointees. In a statement in July, the White House pointed to the fact that only 10 percent of Trump’s confirmations have been allowed to happen by voice vote in Senate, while by comparison, 90 percent of Obama’s proposed candidates were confirmed by a voice vote by the same time in his presidency, in 2009.

Trump has undone numerous policies enacted by Obama since coming into office, including regulatory, economic, and environmental policies that Trump has described as hurting American businesses and jobs.

Most notably, Trump has been strongly opposed to Obama’s signature legislation, the Affordable Care Act (ACA), also known as Obamacare, which mandates that every U.S. citizen must have health insurance at the risk of a penalty. A new health care bill introduced by the Senate failed after three Republican senators voted against it.

“We are going to get rid of Obamacare. I will never stop—one vote—I will never stop,” Trump said in Phoenix, referring to the one vote Republicans were short of when voting on the legislation.

Perhaps Trump’s most forceful criticism of Obama came in a tweet in March, when he wrote: “How low has President Obama gone to tapp [sic] my phones during the very sacred election process. This is Nixon/Watergate. Bad (or sick) guy!”

While Trump was widely criticized for the statement, it has since been uncovered that several key Cabinet members in Obama’s administration made numerous “unmasking” requests during and following the elections, including for members of the Trump campaign.

Unmasking refers to requests made to reveal an American’s identity, which is by default omitted to protect privacy, in intelligence reports. The Obama administration tripled its unmasking requests in the election year, jumping from 654 requests in 2015, to 1,934 requests in 2016.

In an April 4 interview on MSNBC, after Bloomberg broke a story that former national security adviser Susan Rice had made numerous unmasking requests, Rice did not deny that she had requested the names of members of the Trump team, but instead said that it was not for political reasons.

Since then, the House intelligence committee has issued subpoenas for a number of Obama officials over the unmasking, including Rice, former CIA Director John Brennan, and former U.S. Ambassador to the U.N. Samantha Power.