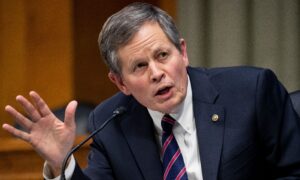 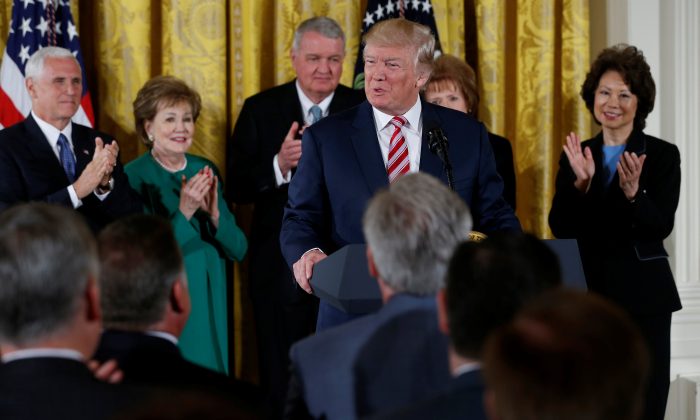 President Donald Trump announces his initiative on air traffic control in the United States from the East Room of the White House in Washington on June 5, 2017. (REUTERS/Jonathan Ernst)
US

WASHINGTON—President Donald Trump on Monday will outline a plan to privatize the air traffic control system, urging the Congress to separate it from the Federal Aviation Administration.

In a summary document sent to airlines and interest groups before the meeting, the Trump administration proposes a three-year transition period to shift oversight of air traffic control.

The proposal says a board made up of airline, union and airport officials would oversee the non-profit entity. The new entity should honor existing labor agreements but controllers would no longer be federal employees.

Trump is expected to say the plan will save travelers time and save fuel costs for airlines. He will be joined by some executives from major U.S. airlines.

On Wednesday, Trump will travel to Cincinnati to talk about improvements to the 12,000 miles of inland waterways, dams, locks and ports critical for shipping farm products, and will deliver a speech about his vision for infrastructure.

The infrastructure push comes as the White House seeks to refocus attention on core promises to boost jobs and the economy made by Trump last year during his campaign for office.

Those pledges have been eclipsed by the political furor over Russia’s alleged meddling in the 2016 U.S. election. That drama will come to a head on Thursday when former Federal Bureau of Investigation Director James Comey, who was leading the Russia probe until Trump fired him, testifies before a Senate panel.

Trump has denied any collusion between Russia and his campaign. He has struggled to keep the spotlight on plans that could give him a political lift.

The infrastructure events this week were in the works before Comey’s hearing was scheduled. They will give Trump the opportunity to provide some counterprogramming to the drumbeat of Russia news.

Privatization advocates argue that spinning off air traffic control into a non-government entity would allow for a more efficient system and rapid, cost-effective improvements of technology, in part by avoiding the government procurement process.

Opponents, including Delta Air Lines, say the U.S. system is so large that privatization would not save money, and would drive up ticket costs and could create a national security risk. There also are concerns that airlines would dominate the private-company board and limit access to airports by business jets. Most airlines back the plan.

The administration’s formal budget proposal unveiled in May that included plans to privatize the nation’s air traffic control system would boost the budget deficit by about $45 billion over 10 years.