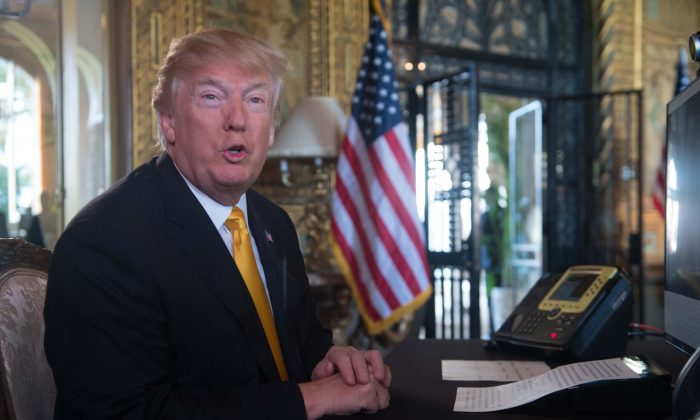 President Donald Trump prepares his traditional address to thank members of the US military via video teleconference on Thanksgiving day, from Mar-a-Lago in Florida, on Nov. 23, 2017. (NICHOLAS KAMM/AFP/Getty Images)
US News

Trump Thanks Troops on Thanksgiving For Defending America’s Freedom

Trump praised the troops and told them that they are “very, very special people to me, and to everybody in this country.”

The president was talking to them from the Mar-a-Lago resort in Palm Beach, Florida, where he and his family are celebrating the holidays.

He talked to five units deployed in different parts of the world.

“It’s an honor to speak with you all and to give God thanks for the blessings of freedom and for the heroes who really have this tremendous courage that you do to defend us and to defend freedom,” he said.

“I know I speak on behalf of all Americans when I say that we totally support you. In fact, we love you—we really do. We love you.

The Army was represented on the call by the First Brigade Combat Team of the 82nd Airborne currently deployed in Kandahar, Afghanistan.

Trump praised the troops for having turned the situation in Afghanistan around in the last few months.

Trump announced in August that he would keep troops in Afghanistan, and lifted a number of restrictions on the military, such as the rules of engagement, allowing the troops to “fight to win.”

Also on the call was the Direct Support Team Golf of the Marine Corps Special Operations.

“These great Marines are operating in Iraq in support of Operation Inherent Resolve,” Trump said.

Trump said that the United States is now really winning the war against the ISIS terror group.

Sailors aboard the USS Monterey, which support the 6th and 5th fleets, were also on the conference call.

“Thank you to everyone aboard the USS Monterey for your dedication,” Trump said.

Also on the call were troops of the 74th Expeditionary Fighter Squadron from Incirlik Air Base in Turkey.

“You’re performing more than 1,000 missions over the skies of Iraq and Syria in the last four months. We’re very, very proud of you,” Trump told the troops.

“Lieutenant Brian Hudson, you and the entire crew aboard the Wrangell are doing incredible work in the Arabian Gulf, performing theater security, defense operations, and maritime infrastructure protection,” Trump said.

“Thank you very much for your service. Very important area.”

Trump told the troops that things in America have been improving.

“A lot of things have happened with our country over the last very short period of time, and they’re really—they’re really good. I especially like saying that companies are starting to come back,” Trump said.

After delivering prepared remarks, Trump spoke with the servicemembers off the record.

“I’m surrounded by reporters and press, and I’m going to ask them to leave, and we’re going to have very confidential, personal conversations,” Trump said.

Since coming to office in January, Trump has put an emphasis on rebuilding the U.S. military. In November the House passed a nearly $700 billion defense bill.

Defense Secretary Jim Mattis told Congress earlier this year that the Budget and Control Act of 2011 and the sequestration had “done more damage to our readiness than the enemies in the field.”