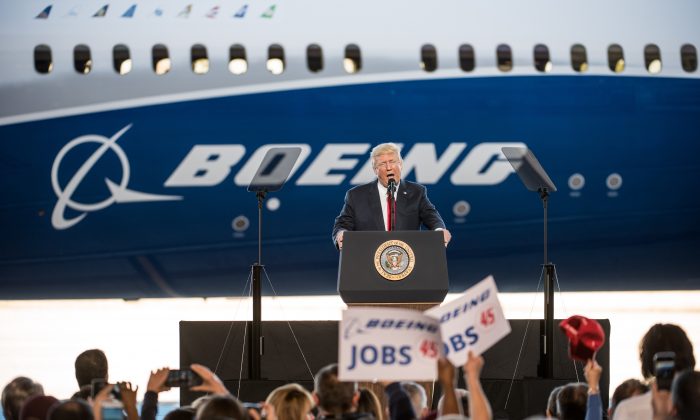 U.S. President Donald Trump addresses a crowd during the debut event for the Dreamliner 787-10 at Boeing's South Carolina facilities in North Charleston, on Feb. 17, 2017. (Sean Rayford/Getty Images)
US

President Donald Trump focused on his promise to reinvigorate American manufacturing in a speech given to Boeing employees and others at the company’s unveiling of the new 787-10 Dreamliner jet in South Carolina on Feb. 17.

He reiterated his intent to convince companies to bring jobs back from overseas.

“It has to be much easier to manufacture in our country and much harder to leave,” he said. “I don’t want companies leaving our country, making their product, selling it back, no tax, no nothing, firing everybody in our country. We’re not letting that happen anymore folks. Believe me. There will be a very substantial penalty to be paid.”

Aside from financial penalties, Trump wants to achieve his goal by reducing taxes for businesses and scaling back “job-crushing regulations.”

“I’m going to do everything I can to unleash the power of the American spirit and to put our great people back to work,” he said.

Trump praised Boeing’s new passenger plane as well as the company’s past contributions to the U.S. military, mentioning the Apache helicopter, F-15, and F-18 fighter jets.

He also talked about the government’s commission for a new presidential jet—Air Force One—saying it was “a difficult project for the previous administration” but “it looks like we’re getting closer and closer.”

On Dec. 6 Trump expressed dissatisfaction with the Air Force One project’s costs, listed at around $3.2 billion by the Government Accountability Office. Other estimates have put the current cost at around $3.7 billion.

On the other hand, Trump suggested the military may buy more F-18 Super Hornets from Boeing.

“By the way, do you care if we use the F-18 Super Hornets?” Trump asked the crowd. “We are looking seriously at a big order.”

Trump previously floated the idea of Boeing upgrading the F-18 to match the capabilities of Lockheed Martin’s F-35, which has been plagued by cost overruns and delays.

The F-18 lacks certain capabilities that the F-35 has, such as stealth.

Trump has said he wants Lockheed Martin to push down the price for the F-35.