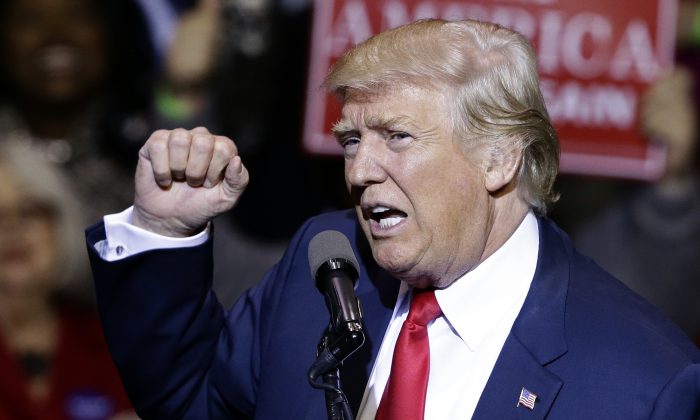 FAYETTEVILLE, N.C.—President-elect Donald Trump promised to “heal our divisions and unify our country” as he prepares to meet with some of the victims of last week’s car-and-knife attack at Ohio State University.

“When Americans are unified there is nothing we cannot do—nothing!” Trump told the crowd at a rally Tuesday night in Fayetteville, North Carolina. “I’m asking you to dream big again as Americans. I’m asking you to believe in yourselves.”

The Republican businessman largely stuck to the script—even stopped the crowd when it started to boo the media—and avoided some of the score-settling and scorched-earth rhetoric that defined his campaign and was present last week in Cincinnati.

Meanwhile, Trump was named Time magazine’s Person of the Year on Wednesday, a choice the magazine’s managing editor said was “straightforward” given that Trump had upended politics-as-usual during the course of his extraordinary race for the White House.

“It’s a great honor. It means a lot,” Trump said in a telephone interview on NBC’s “Today” show.

Trump is expected to visit Columbus, Ohio, on Thursday, according to a person familiar with the plans but not authorized to discuss them before they are announced.

Why China Cannot Lead Globalization in a Post-Trump World

Authorities have said Ohio State University student Abdul Razak Ali Artan, 18, stabbed students before being fatally shot by police. He first rammed a campus crowd with his car before hopping out with a knife. They said Artan, a Somali immigrant, was inspired by ISIS rhetoric. Trump has denounced the immigration policies that allowed Artan into the country.

In North Carolina, he repeated his vow to fortify the nation’s military and brought Marine Gen. James Mattis on stage, officially naming his choice to be defense secretary after teasing it last week.

Earlier Tuesday, Trump telegraphed that when he takes office in six weeks he’ll take an interventionist role in the nation’s economy—as well as play showman when he sees a chance. The celebrity businessman’s declaration about Air Force One caused manufacturer Boeing’s stock to drop temporarily and raised fresh questions about how his administration—not to mention his Twitter volleys—could affect the economy.

“The plane is totally out of control,” Trump told reporters in the lobby of Trump Tower. “I think Boeing is doing a little bit of a number. We want Boeing to make a lot of money, but not that much money.” Earlier he had tweeted that the deal’s costs were “out of control, more than $4 billion. Cancel order!”

Trump Gets Down to Business on Air Force One, SoftBank

Not long after his first appearance, Trump returned to the lobby with Masayoshi Son, the CEO of SoftBank, a massive telecommunications company that counts Sprint among its holdings. Trump pointed proudly to Son’s commitment to invest $50 billion in the United States, which Trump said could create 50,000 jobs.

Trump—who also tweeted the deal—shook Son’s hand and posed for photos. Details of the deal were scarce and it was unclear if the money was part of a fund of up to $100 billion in global technology investments that SoftBank and the government of Saudi Arabia announced in October.

As for Air Force One, the government has agreed that Boeing will build two new planes, which would go into service around 2024. That means Trump might never fly on the aircraft, which carry U.S. presidents around the globe.

The overall deal for researching, developing and building new planes was to be about $3 billion, but costs have been reported to be rising. The General Accountability Office estimated in March that about $2 billion of the total—for work between 2010 and 2020—was for research and development on complex systems, not for building the actual aircraft. The inflated $4 billion figure Trump cited appears to include operation and maintenance as well.

Trump had tweeted in 2013 that he owned Boeing stock, but a spokesman said Tuesday he sold all of his stock holdings in June. That sale was not publicized by the campaign at the time, and aides did not reveal how much cash it might have generated.