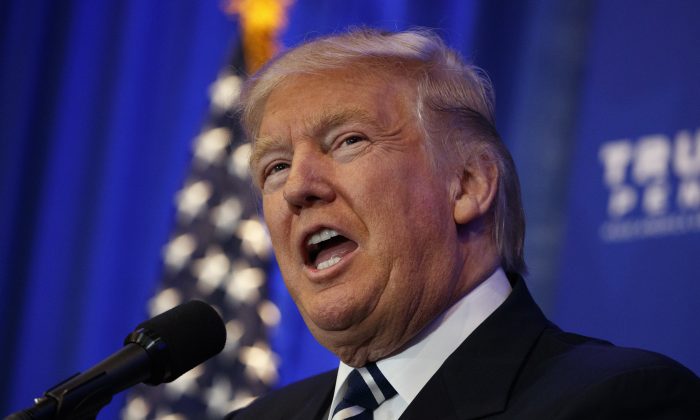 Grisham has been on leave from her Arizona job since shortly after the Legislature adjourned in May working on press matters for the Trump campaign. She said Wednesday that she will travel with Trump to handle the protective press pool that accompanies Trump and act as a spokeswoman.

Grisham also confirmed that she will be leaving her Arizona House job, although she didn’t set a date.

DeWit said his new role as special adviser for operations is a volunteer post that won’t take a large amount of his time. DeWit served as chief operating officer for the Trump campaign beginning in June.

DeWit said he will be “assisting when needed to make sure the transition is running and smoothly and efficiently as possible.”

“As I’ve been throughout the campaign I am excited to do what I can to help Mr. Trump drain the swamp in Washington,” he said in an interview.

DeWit was able to serve both as state treasurer and nearly full-time running the Trump campaign finances because statewide elected officials have no set hours, detailed job duties or requirements that they work full-time.

“There is no requirement that Jeff DeWit provide 40 hours each week for the state treasurer’s office,” said Tom Ryan, a Chandler attorney who has filed complaints against elected officials for conflicts and other issues in recent years. “The framers of the Arizona Constitution believed that if an elected official in a statewide office is not functionally doing their job it will be reflected in the next election and they will be removed from office by the voters.”

For his part, DeWit said his advisory role is unpaid, and he’s not alone in having outside duties. He makes $70,000 a year as state treasurer and says he took a major pay cut from his job running an investment company when he took office in 2015.

There are no restrictions that limit elected officials in Arizona from moonlighting in various positions.

Corporation Commissioner Andy Tobin has a job with Arizona State University that allows him to develop training for new lawmakers, a position that generated controversy when it was revealed recently. He makes $79,500 a year on the Corporation Commission and reportedly earns $100,000 from ASU.

Susan Bitter Smith, Tobin’s immediate predecessor, had to step down from the commission early this year because her job running a cable industry association was a direct conflict with her role at one of the state’s elected utility regulators.

Gov. Doug Ducey has also had outside duties, and he still has obligations outside his full time job. As treasurer in 2012, he ran the opposition to a proposal to make a sales tax increase permanent to fund schools and backed a plan proposed to voters to stabilize payouts from the state land trust. Ducey’s side won in both cases.

He also was heavily involved this year with the opposition to Proposition 205, which would have legalized marijuana.