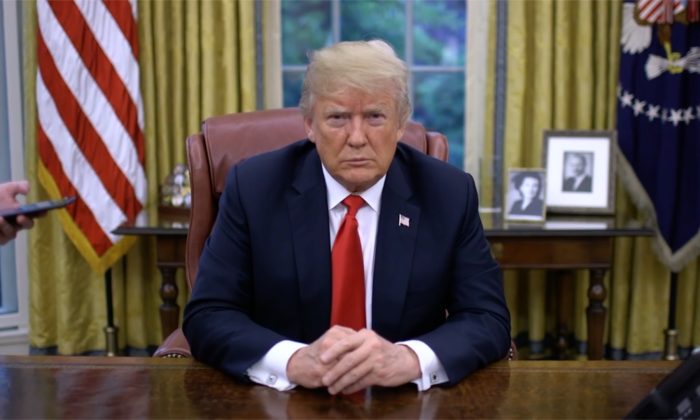 “To empower our civil servants to best help others, the government must always operate more efficiently and more securely,” Trump said in a statement.

The administration expects one of the orders will save the government $100 million a year when fully put in practice.

Based on one of the orders, poorly performing federal employees would now have one month to improve, instead of previous three to four, before they are reassigned, demoted, or fired.

The order also encourages agencies to fire employees, not suspend them, “in circumstances in which removal would be appropriate.”

“Tenured federal employees have stolen agency property, run personal businesses from work, and been arrested for using drugs during lunch breaks and not been fired,” the fact-sheet states.

Agencies will also have to report disciplinary actions and management of poor performers to the Office of Personnel Management, which will release the data to public (without personal information).

“The federal employee viewpoint survey has consistently found that less than one-third of federal employees believe that the government deals with poor performers effectively,” the order states.

Elsewhere, it says: “Failure to address unacceptable performance and misconduct undermines morale, burdens good performers with subpar colleagues, and inhibits the ability of executive agencies … to accomplish their missions.”

Employees will be required to spend at least 75 percent of their time working on their jobs, except in some limited cases of union work.

Unionized federal employees (excluding postal workers) spent over 3.6 million hours doing union work on taxpayer expense in 2016. That’s up from about 3.1 million in 2010. It means the government paid its employees almost $175 million for handling union matters in fiscal year 2016, according to an April report by the Office of Personnel Management.

“Over 470 Veterans Affairs employees spend 100 percent of their duty hours working for a labor union instead of serving veterans. This includes 74 full-time nurses,” the fact sheet states.

The executive order also prohibits employees from using their work hours to lobby the government or pursue union grievances against the government.

Moreover, union representatives won’t be allowed to use government property or resources for free or at a discount.

“Such property and resources include office or meeting space, reserved parking spaces, phones, computers, and computer systems,” the order states.

The last order aims to shorten the time for bargaining of union contracts to less than a year.

The union agreements will also be published online so that Americans can “gauge for themselves whether they got a good deal.”

Union representatives oppose the orders and are looking for ways to fight them, including through legal action, according to Government Executive, an online publication.